The RI Smallbore Rifle League held its annual dinner and awards night on Saturday April 28th at the Varnum Memorial Armory. Attendees were able to tour the museum containing military firearms, uniforms, equipment, and artifacts from the 16th century to the present before enjoying their dinner. After dinner the awards were presented.

The RI Smallbore League shoots a 3-position 30-shot match on the NRA/USA 50 targets on Thursday nights from October through March. The first awards of the evening went to high shooter on each team, Ed Jaques for Cumberland, Joe Graf for Smithfield, Stephanie Gzybowski for South County and Scott Lewis for Newport. Next we moved on to the class awards. John Polseno took the Marksman class, Scott Lewis took the Sharpshooter class, and Joe Graf took the Expert class. The most improved shooter award went to Tim Faunce.

The league’s top individual honors went to Joe Graf for high league average of 269, done using iron sights. The high scope award went to Al Thurn for his 261 average. The high senior award was presented to Ed Jaques for his 259 average.

The final smallbore award of the evening was the league’s Team Championship award. This was presented to the South County; they ended the season with a record of 11-7. 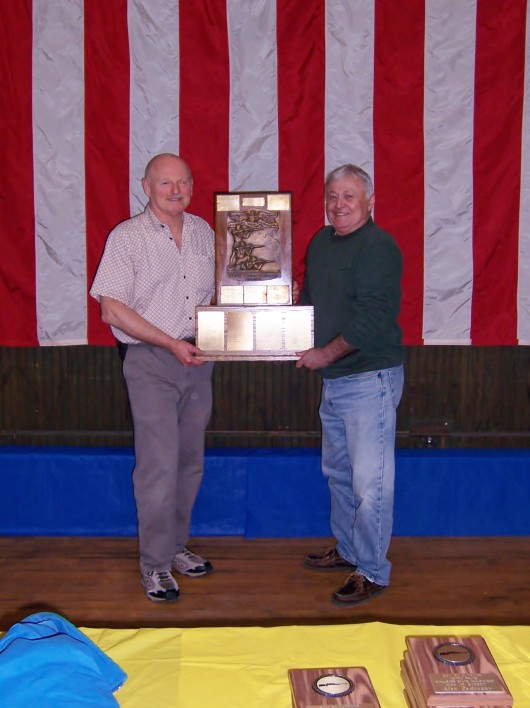 Bob Hall (left) and Dick O’Rourke from South County with the RI Smallbore Rifle League trophy dating back to 1933.

Joe Graf started shooting competitively as a junior in 1983 in both smallbore and high power rifle. After completing his junior career, he turned his attention to focus on smallbore rifle. In addition to shooting competitively, Joe has been the director of the RI Smallbore Rifle League since 1993, the Director of Smallbore Competition for RI State Rifle & Revolver Association since 2005, a member of the 2007 National Four Position Indoor Championship team, and Executive Officer of the RI State Rifle & Revolver Association since 2010. He is a National Record Holder, member of the Smithfield Sportsman's Club, the Blackhawk Rifle Club, and Digby Hand Schuetzenverein. He is a contributor to pronematch.com.
View all posts by Joe Graf →
This entry was posted in Results. Bookmark the permalink.