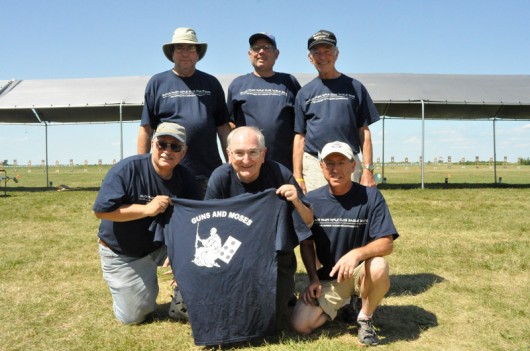 Competitive shooting, and all of the minutiae that goes with it, has a long and storied history. In fact it reaches far back into antiquity, So far back, in fact, that its earliest mention in the public record occurs in the Bible.

I suspect that after that bold statement most will think that I have spent too much time shooting in the gallery and, as a result, am suffering from dementia caused by excessive exposure to lead. While that may have a germ of truth to it I am still coherent enough to cite the source of my belief.

It seems that there once roamed, in the Valley of Elah, a Philistine giant some six cubits and a span tall. For 40 days this fearsome warrior, Goliath by name, challenged the Israelites twice a day to send out a champion to do single combat and decide who would occupy the disputed territory.

Saul, the leader of the Israelites, offers a reward to anyone who is brave enough to take on and defeat the giant. David, a young shepherd lad, takes up the challenge and carefully prepares himself. According to 1 Samuel, chapter 17:40 David, “… took his staff in his hand, chose five smooth stones from the stream, put them in the pouch of his shepherd’s bag and, with his sling in his hand, approached the Philistine.”

It is pretty clear to me that David’s culling of stones in the streambed was nothing other than selecting the best lot of ammunition for his sling.

David loaded a stone from the ‘knot lot’ he had in his pouch, into his sling and proceeded to fire a first shot X, without even a warmer or a sighting shot, dropping the Philistine like a bad habit. He next drew the giant’s sword, killed him with it, and then chopped off Goliath’s head.

This all came to mind when I received a call from fellow Black Hawk Rifle Club member Denis Lindenbaum. Dennis told me that another Black Hawk, Randy Schwartz, had called him with the curious idea that that the Black Hawks might be able to field a prone team at Camp Perry entirely populated with “The Chosen People.”

When I mentioned this twist to Camp Perry 2011 at breakfast one morning my wife Margaret perked up. She thought my little burst of religious recognition might solve a little dispute that has been simmering in our household for some time. Margaret is an early riser, walks several miles each morning with a few of the neighbor ladies for exercise, and then comes home in hopes of finding me out of bed and preparing breakfast.

I am amenable to getting things set up but I shy away from making her coffee. I do not drink it and, as it is an important part of her day, and clumsy as I am, I do not want to mess it up. She does not accept my argument and sees no reason why I can’t prepare her morning pick me up.

In reply to my announcement that I had to shoot this match she replied that in light of my decision it was time to live up to my Biblical duty to prepare her coffee. Curious, I asked what Biblical injunction would so direct me.

She said, “It is not an injunction, it is the book of the Bible that immediately precedes The Book of James.

Within a short time after being put in my place by my wife the entire demographic had been contacted and we began laying plans for this historic event. Much as when Caesar Augustus put forth the word that all the world should be enrolled so it was with the Jewish members of the Black Hawks, all seven answered the call. Lindenbaum, Schwartz, and I were joined by my brother Steve, Don Lerner, and Larry Hoffman. Eitan Barazani, probably the best shot of all of us, had to decline as, ironically, he was going to miss Perry as he had to be in Israel the last week in July.

We mustered on team day, a shooting David hoping to knock off the Army Goliath, and donned our team T Shirts. Dark blue, they proudly proclaimed across the chest, in white faux Hebrew lettering, that we were the Black Hawk Bagel Boys and that, “We answer to a higher authority.” Upon the back was an image of Moses holding a rifle and an A-27 target with “Guns and Moses” emblazed above the logo.

Although we had a good time and shot a decent score we did not follow in the footsteps of David. We did not even win a few NRA points, let alone the head of a defeated enemy.

At the end of the match we followed another tradition that generations of shooters and Jews have participated in for as long as anyone can remember. We traipsed to the traditional site of both rejoicing and sorrow to view the results of our efforts at the score board known affectionately to rifleman as “The Wailing Wall.”