The purpose of the “Shooter Spotlight” is to help shooters get to know their fellow competitors a little bit better. We cover a wide range of shooters from “Marksman to Master.” This is the 16th interview in the series. 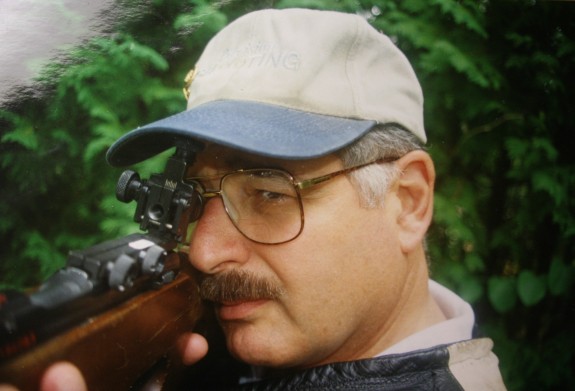 Where do you call home?
Quaker Hill Rod and Gun Club is my shooting address, but I like to think that every rifle range is my home.

How long have you been shooting?
I first shot when I was about eight, but that was just a little plinking.

How did you get involved in shooting competitively?
I started competitive shooting as a high school freshman in 1961 at New London High School, following in my brother Steve’s foot steps, under the great teacher and coach George H. Gregory, Jr.

What is a little known fact about yourself that your fellow competitors might not know?
I believe that I am the only living person existant who has held in his hands the Dewar, Pershing, Randle, and Roberts trophies.

What do you consider your finest shooting achievement.
The 35 or so years I have worked with juniors and new shooters as a coach and mentor is what makes me proudest about my shooting career. I have been at it so long now that most of my present Mohegan Rifle league team is made up of my old juniors.  Some of their children are now competing which sort of makes me their shooting grandfather.

What is your favorite pre-match meal?
An onion roll with cream cheese and a glass of orange juice is my favorite way of filling the pie hole before a match.

What is your favorite post match drink?
An ice cold Coke in a glass bottle is my preferred way of rehydrating after shooting.

Do you have a favorite shooting range?
Like food, I have never come across a shooting range that I have not liked-just some more than others.

Do you have any short term and/or long term goals?
Long term I am looking at making a run on the NRA 3P Outdoor Smallbore Rifle Senior Championship in 2012 when I turn 65.  Look out Lenny Remaly and Jay Sonneborn!

What shooting skill are currently focusing your energy on?
I am working at improving my prone so that I might earn the Perry leg I need to earn prone Distinguished as well as my standing position, which has been suffering from neglect.

Thanks Hap for sharing a little bit about yourself with the pronematch.com community!

Dan Holmes started shooting competitive smallbore in 1986. During his Junior career, he earned two national junior team titles as well as local and regional wins. After a 10 year year hiatus to attend college and start a family, Dan returned to the sport and has added local, sectional and regional wins to his shooting resume. Dan is a Distinguished Rifleman, National Record Holder, U.S Dewar Team Member, Black Hawk Rifle Club Member, Digby Hand Schützenverein member, and is the founder of pronematch.com. He lives in Massachusetts with his wife and 2 children.
View all posts by Dan Holmes →
This entry was posted in Shooter Spotlight and tagged Hap Rocketto. Bookmark the permalink.