The purpose of the “Shooter Spotlight” is to help shooters get to know their fellow competitors a little bit better. We cover a wide range of shooters from “Marksman to Master.” This is the 66th interview in the series. 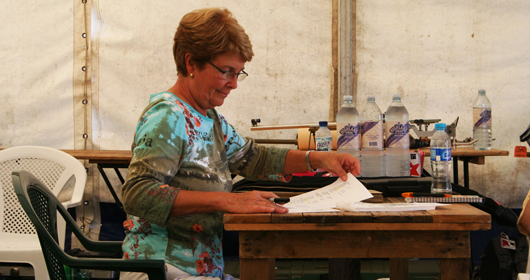 Where do you call home?
Home is Eastport, Michigan (on the shores of Grand Traverse Bay).  But we “snowbird” in Tierra Verde, FL (near St. Pete Beach).

How long have you been shooting?
My first shooting experience was in the Jr. & Tyro School at Camp Perry in 1954, which I did again in ’56, ’57, and ’58.  I also did some indoor shooting with our local gun club (Allen Park, MI) which my mother helped coach.  I started competing in outdoor prone matches in 1959.  That year was also my first entry in the National Matches.

How did you get involved in shooting competitively?
Since my parents (Max and Marianne Jensen) were competitive smallbore shooters, my sister Lenore and I naturally got involved in the sport as soon as we were old enough.

What is a little known fact about yourself that your fellow competitors might not know?
A little-known fact that my fellow competitors might not know?  That’s a tough one.  It used to be my name/s.  Because shooters knew me by my family nickname, which was “Candy”, or my real name “Marianne”; but didn’t know me by the name most people had been calling me since the 8th grade, “Bobbi”. But that’s not the case any longer.  (I still am most comfortable with either nickname.)

1960- my first Randle and Dewar Team appearances and National Junior Championship (as a 15 yr. old in Sharpshooter class)

1962- fired a 598 (English match record… also speed record, 60 shots in less than 30 min. on manually pulled target frames at Fort Benning ) in the U.S. tryouts for the team going to the World Championships in Cairo, Egypt.

After that, the years get sketchy and the achievements less, but I’m proud of my something like 34 times on the Randle Team (Edie has me beat on total and, especially, on consistency).  And being on the National Team Championship winning Black Hawk Women’s Team was lots of fun.

What is your favorite post match drink?
A post-match beer on the range, or a Dewars-and-water later, or a nice glass of wine with dinner, or… whatever you’re serving, works just fine for a post-match drink, thank you.

Do you have a favorite shooting range?
Favorite range:  Camp Perry and Michigan City, IN.  That’s all I shoot… one weekend and the Nationals.

Do you have any short term and/or long term goals?
Goals:  Just to keep on enjoying being with my shooting friends.  And, of course, trying to stay competitive in the sport I love.

What shooting skills are currently focusing your energy on?
Current focus on shooting skills:  Bob (husband) and I are shooting sporting clays at the Charlevoix Gun Club when we’re home, and we just joined a trap and skeet club near us in Florida, where we’ve been shooting trap twice a week.

Thanks Bobbi for sharing a little bit about yourself with the pronematch.com community!