On Tuesday April 26 the top shooters from the RI Smallbore Rifle League trekked north to Sharon Fish & Game to take on the top shooters from the Massachusetts South Shore Rifle League. The annual Goodwill Trophy Team Rifle Match marks the end of the Indoor 3-P rifle season for both teams. First held in 1981, the match was shot for 5 years. In 1991 it was revived and has been shot each and every year since then.

The match, fired on NRA A-36 50-foot target, takes the top five scores from each team to calculate the team score. The MA South Shore team got a great jump out of the gate. At the end of the prone they had the lead, 494 to 473. Moving to kneeling, the MA South Shore team built on their lead adding 464 points while the Rhode Island Smallbore team added 411.

At this point the standing stage was just a formality. MA tacked on 458 points to RI’s 351 points. The evening ended with the MA South Shore team setting a match record, 1416 points, one point better than the previous best, also held by MA. RI’s team total was 1235 points. Massachusetts retains the Goodwill Trophy for another year.

The Richard P Hanson trophy is awarded to the top shooter on each team. This year the trophy went to Dan McCabe from the MA South Shore team and Scott Lewis from the RI Smallbore Rifle team. Complete results can be downloaded here: 2011-ma-goodwill-match (PDF, 975KB) 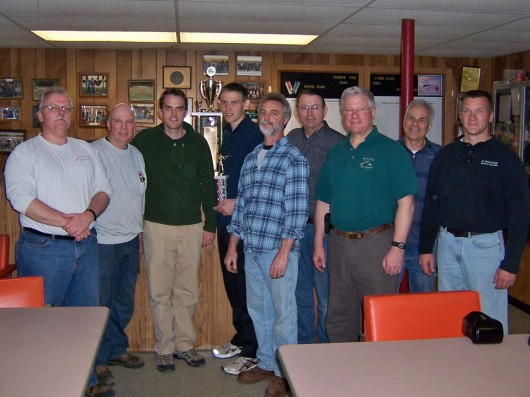 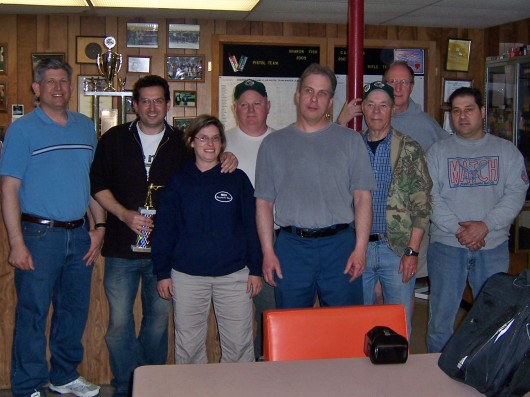 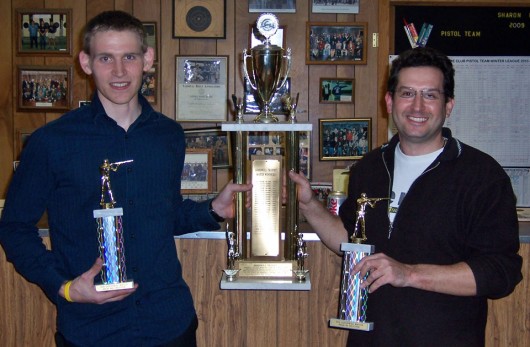 Dan McCabe (left) and Scott Lewis (right) with their Richard Hanson trophy and the Goodwill trophy between them.