This spring I decided to try a bloop tube on the end of my barrel to see if it helped me see the front sight more clearly. So 2 months ago, I started shooting irons with the new tube and was very pleased with the improvement in sight picture (and I think think it helped my sight alignment, as well). In fact, I was so pleased with my results that I just kept shooting irons, leaving my trusty scope in my bag in favor of getting the extra practice with the metallic sights prior to Camp Perry.

Then, at last Thursday’s HPM, I decided I would throw the scope back on in preparation for the MA State Championship. I left the new bloop tube on my barrel but took off the front sight and riser block (I should note that my particular tube has three holes in the end of it to accommodate a sight block if one is desired). After the match, I wasn’t real pleased with my results. My groups were widely dispersed and shots were not going where I was calling them. I chalked it up to the fact that I wasn’t shooting my “good” lot of ammo–I have taken to hoarding my good lot of Eley because I only have 1500 rounds left and can’t afford to do some proper lot testing and the moment.

So Saturday morning I headed off to the State Championship with a lot of Eley black that had performed adequately prior to using the new tube. I shot the prone stage of the match and had the same result,widely dispersed groups and shots not going where I called them. Frustrating.

About half way through the match, I began to wonder more about how removing the front sight might be effecting the harmonics of my rifle and began to hash it out with my teammates Len Remaly and Erik Hoskins. Not only is removing the front sight taking a chunk of weight off the end of the tube, but the front sight is also covering the tap holes that are in the end of the tube. I know of several shooters that flip the tube upside down so the sight hangs off the bottom when they shoot scope. I also know of one shooter (Hap Rocketto) that just leaves his front sight on and the scope just “sees” through it. Neither of these techniques seemed particularly appealing but since we were now in the standing stage of the match, I didn’t think that tinkering with the tube would give me much feedback so I decided to save the tinkering for another day.

So Monday I took advantage of a few rare hours of free time and went over to the range. My test would be simple. Use my good lot of Eley as I know it shoots good and shoot a group with no riser block/front sight and shoot a group with the just the riser block and a piece of electrical tape covering the one tap hole that the block doesn’t cover. I warmed the barrel, sighted in and shot a 10 shot group with the “naked” tube and then repeated the process with the block/electrical tape configuration. The conditions were identical for both groups, shot at 100 yards prone, no sight adjustments were made. The results are below. 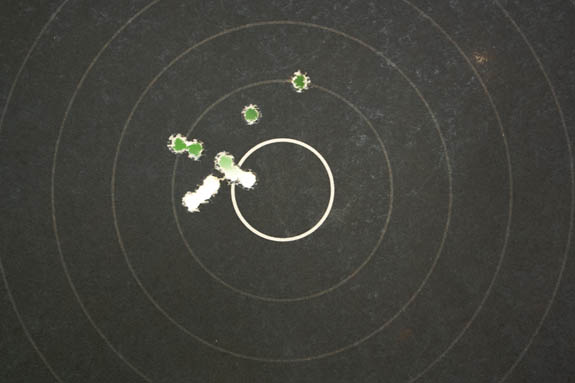 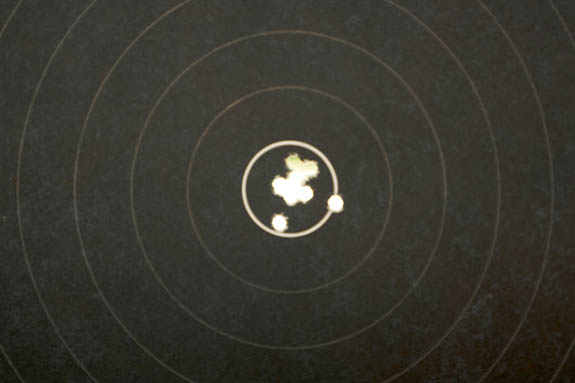 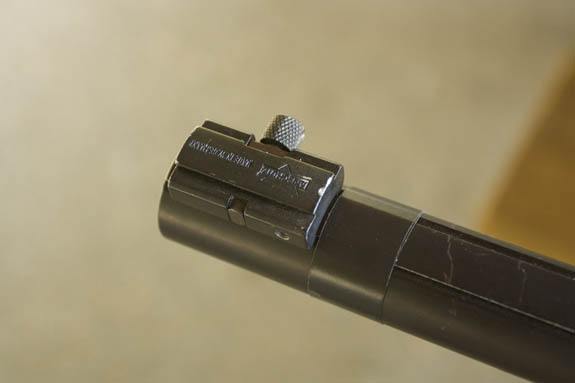 That’s a pretty big difference in group size. Now I realize my test wasn’t particularly scientific or thorough but I do think it strongly suggests that removing the front sight and riser block does in fact reduce accuracy on my rifle. I repeated the test again with similar results. What’s it all mean? Well, it means I can’t continue to ignore all of the discussion about “tuning” that I hear on the range and on the web. That said, I’m not sure I’ll be running out and buying a proper tuner any time soon…after all I’m getting pretty good results so far with a 30-year-old riser block and a little electrical tape!

Dan Holmes started shooting competitive smallbore in 1986. During his Junior career, he earned two national junior team titles as well as local and regional wins. After a 10 year year hiatus to attend college and start a family, Dan returned to the sport and has added local, sectional and regional wins to his shooting resume. Dan is a Distinguished Rifleman, National Record Holder, U.S Dewar Team Member, Black Hawk Rifle Club Member, Digby Hand Schützenverein member, and is the founder of pronematch.com. He lives in Massachusetts with his wife and 2 children.
View all posts by Dan Holmes →
This entry was posted in Other Smallbore Information and tagged bloop tube, tuning. Bookmark the permalink.