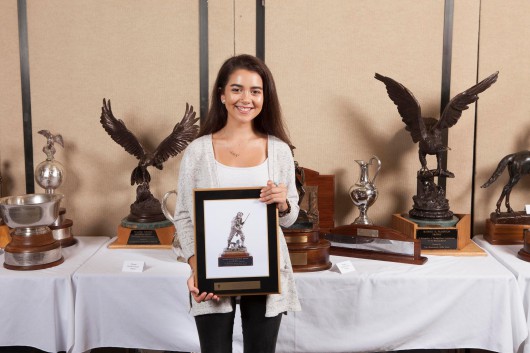 Portsmouth Rhode Island High School senior Ruby Gomes has committed to the University of Kentucky Wildcat’s nationally ranked rifle team. Gomes will be joining a team which has made 17 consecutive appearances in the NCAA championships and produced over 60 All Americans.

After learning basic skills at various local clubs, she won the Rhode Island Junior title and finished in the top three of the Junior Olympic Rifle Championships at the Olympic Training Center in Colorado Springs, Colorado.

Wishing to hone her skills Gomes spent her junior year in Colorado Springs training with the National Training Center Shooting Junior Program. As a resulted she was selected to represent the United States at the 2017 Shooting Hopes junior competition in Pilsen, Czech Republic where she was a teammate of Olympic Gold Medalist Ginny Thrasher.

Gomes, who was heavily recruited, selected Kentucky for its excellent academic and athletic programs.

Dan Holmes started shooting competitive smallbore in 1986. During his Junior career, he earned two national junior team titles as well as local and regional wins. After a 10 year year hiatus to attend college and start a family, Dan returned to the sport and has added local, sectional and regional wins to his shooting resume. Dan is a Distinguished Rifleman, National Record Holder, U.S Dewar Team Member, Black Hawk Rifle Club Member, Digby Hand Schützenverein member, and is the founder of pronematch.com. He lives in Massachusetts with his wife and 2 children.
View all posts by Dan Holmes →
This entry was posted in Other Smallbore Information. Bookmark the permalink.