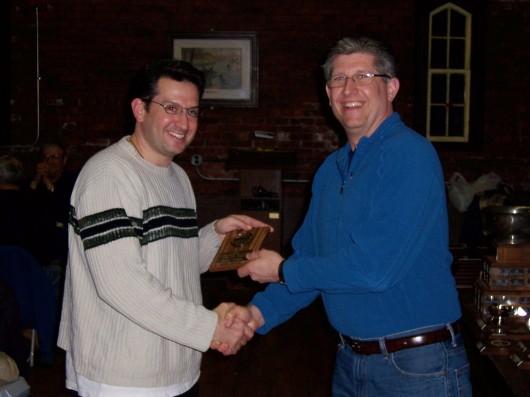 The Newport Rifle team with league’s perpetual trophy dating back to 1933.

The Varnum Memorial Armory was the site of RI Smallbore Rifle League’s 2011 awards banquet. Attendees were able to tour the museum containing military firearms, uniforms, equipment, and artifacts from the 16th century to the present before enjoying their dinner. The dinner started when attendees headed into the lounge to cook their own steak over a charcoal fire in the fireplace. After the steak was cooked they proceeded upstairs to the ceremonial hall to add salad, bread, baked potato, and corn to their dinner plates.

Ice cream and coffee signaled the start of the awards portion of the event. The league shoots a 3-position 30-shot match on the NRA/USA 50 targets on Thursday nights from October through March. The first award of the evening went to Scott Lewis; his 269.13 average took top honors for individual average and this was accomplished using iron sights. Just two and a half points behind Scott was Dick Palmer. He took the top scope sight award.

Ed Jaques’ 255.61 average earned him the High Senior (over 60 years of age) award. In the classification awards, the Expert Class award went to Dick Palmer, the Sharpshooter Class award to Scott Lewis, the Marksman Class award to John Polseno (250.18), and the Tyro Class award to Tim Faunce (217.07).

Dennis Gath fired a 236.61, 11.46 points better than his average from last year to win the Most Improved award. The High on Team awards went to Ed Jaques of Cumberland, Dick Palmer of South County, and Scott Lewis of Newport.

The final award of the evening was the league’s Team Championship award. This was presented to the Newport Rifle Club; they ended the season with a record of 15-3.