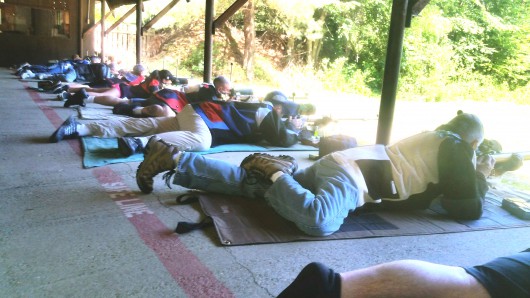 The Smithfield Sportsman’s Club outdoor range was crowded as prone shooters from southern New England vied for the gold medallion. It was a warm sunny day marked by light and variable breezes that made smallbore bullets occasionally dance a stately, but unpredictable gavotte, as they headed down range.

Shooting a one day NRA Regional course of fire the tournament opened with 40 shots at 50 yards with metallic sights. Six competitors posted perfect 400s with Joe Graf, of the host club, banging out a pair of 200-18Xs for the win. Former Hudson junior standout Brian Jylkka hot on his heels with a 400-34X placing him as first Master. Newport’s Alex Muzzioli, in his last match before starting his Plebe Year at the United States Naval Academy, took home Expert honors. Michael Jerome posted a 400-23X as top Marksman.

Match two was fired at 50 yards on the 50 Meter reduced target as Smithfield does not have a 50 meter line. Taunton Massachusetts Rifle and Pistol Club’s Maggie Flanders carded a 400-31X for the win while boxing out Graf by an X who settled for Master class honors. Muzzioli was top Expert as Jerome and Bob Andreozzi battled out for top Marksman with Jerome prevailing by Xs.

The 50 yard target was again hung for the first stage of the Anysight Dewar Course began. Seven 200X200s were shot, all in the 15X area, before the competitors carried the frames down to 100 yards where the match would be decided. Coast Guard Academy Assistant Rifle Coach Hap Rocketto punched out a near perfect 200-17X at long range to win the match on the back of a 400-32X leaving Jeff Doerschler, a Dewar Team member, as the top Master with the only other 400 six Xs behind. Muzzioli cruised to the Expert class win shooting a 399-31X. Hanson’s Matt Lazarski picked up the Marksman win with a 396-14X ahead of Jerome, 395-21X who beat out Andreozzi by eight Xs.

The final match of the day was 40 shots at 100 yards with any sights won by Rocketto who posted the only 400, a 26X effort that ended with a final bull that scored 100-10X. Doerschler pulled in second with a 399-30X that was the Master class best score. Muzzioli repeated as Expert class winner by besting New Hampshire’s Frank by three Xs as both scored 399s. Marksmen Lazarski and Jerome again battled out as Lazarski took home another class award topping Jerome’s 396-21X with a 397-15X.

Although Graf gave up three points in the three stages of 100 yards he posted the highest aggregate score, a 1596-115X for the gold medal and a National Championship voucher. Bob Lynn remained pretty much below the radar all day but the New Hampshire jurist emerged as the silver medalist tying Graf in Xs but falling behind by a single point. Rocketto, after a horrible second card in the 50 yard match in which he dumped four points, held hard for the rest of the day winning the bronze medal by a slim one X margin over first Master Doerschler, 1595-107X to 1506-106X.

To no one’s surprise the Expert medal went to Muzziolli while Jerome won Marksman class by a 14 point margin.

Graf was the high senior resident and Muzzioli was the top Rhode Island junior and both will receive David Kettlety Trophy Plaques emblematic of state champion status.

The line was professionally run by Bill Dutton who, along with daughter Elizabeth, departed Smithfield immediately after the match for a month long journey that will see Elizabeth compete at the USAS Championships at Fort Benning and then both will shoot in the pistol phase at Camp Perry. Nicole Panko scored the targets so successfully that there was not a single challenge filed for any of the 2,880 record shots.