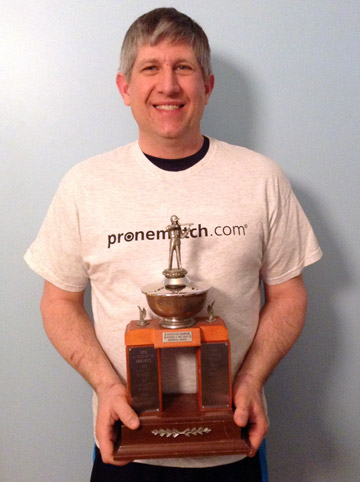 The match, first shot in 1982, is currently an international half course, 60 shots, with 20 shots in the prone, standing, and kneeling position on the demanding NRA/USA 50 target. It is any sight match which means that competitors may use either metallic or telescopic sights. The match enjoys a rich tradition and some of Rhode Island’s best riflemen’s names are engraved upon the George Melcher Trophy. Hap Rocketto was the first winner, followed by George “Spike” Hadley, Joe Caires, Erik Hoskins, and Graf. The trophy itself honors Melcher who was an outstanding Ocean State coach and supporter of the shooting sports.

No sooner had Range Officer Dave Farrar called, “Commence fire!” then Lynn made his statement with a perfect 100 on his first card. He backed up with a 98X100 for a prone match winning score of 198X200. Graf and Ed Jaques, of the Cumberland Beagle Club, were knotted in a tie at 192X200 each. Graf’s consistency earned him second place as he shot a pair of 96s. Jaques started with a 97X100 but finished with a 95X100, one point less than Graf on the high score on last target tie breaking rule.

While Statistical Officer Nicole Panko was busy scoring prone targets the standing relay got underway. Graf made up lost ground on Lynn with his 179X200 to Lynn’s 165X200. Cumberland Beagle’s John Polseno was nipping at Lynn’s heels with a 163X200 for third.

With just a few more weeks of the Rhode Island Rifle League left the championship is a harbinger of the end of the indoor season. The last major match will be the Goodwill Match between the Rhode Island and Massachusetts Leagues.