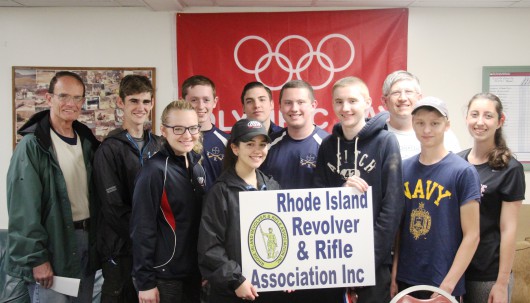 Rhode Island NRA 3P competitors smile for the camera with joy because they were inside, with their gear packed away at the awards ceremony when the threatening heavens at last opened up. Photo by Aileen Urbach.

Competitors unpacked their gear under lowering skies at the start of the 2016 Rhode Island 3 Position Metric Regional and Jules Epstein Trophy Match at the South County Rod and Gun Club on June 5, 2016.

The threat of heavy rain caused a few last minute cancellations which allowed the range staff to combine two relays into a single full range in hopes of shortening the competitors’ exposure to rain if not beating the arrival of the rain gods altogether.

The three position match was shot at a full 50 meters and emulates Olympic competition, a fitting gesture as the event was also one of nearly 2,000 Olympic Day events conducted in honor of the Olympic Games. To make the day just a bit more exciting various electronic devices were tuned into the final selection match for Olympic air rifle slots being held at Camp Perry, Ohio.

Bailey Urbach, a member of The Ohio State Rifle Team, quickly made her mark by edging out Joe Graf in the 40 shot prone event 392-22X to 391-21X. Graf, shooting scope, had started off with a near perfect 199-10X to Urbach’s 196-10X. Urbach, however, was remarkable consistent with her iron sights shot a second 196, this time with 12Xs for the win. Ruby Gomes was high Master based on her 387-17X performance. Mike Jerome posted a 387-18X to lead the combined Expert, Sharpshooter, Marksman Class.

The diminutive Gomes, a recent transplant to Rhode Island, led the standing match from the very start as she posted a 186-3X followed by a 181-3X to win the match with a 367-6X. Close behind was first Master Urbach with a 363-8X. The duo moved into kneeling with Urbach holding a slim one point lead. Maggie Flanders edged out Matt Lazarski by a single point to grab combined class honors.

With the gold medal in the balance Urbach used almost all of the 30 minutes allowed for the 20 shot string to put together a 189-6X first stage to Gomes’ 185-4X and opened her lead to five points. She sealed the deal on her second string with a 186-5X to give her the kneeling match as well as the aggregate. Gomes settled for first Master while Flanders slipped by Bob Lynn by two points for the combined class win.

The Gold went to Urbach, her third to three finish in as many matches and a personal best of 1130-41X. The silver medal showed up quite well against Gomes’ black monochromatic shooting outfit and was well earned with an 1122-32X. Flanders flaxen hair was complimented by the bronze medallion as she edged out Alex Muzzioli, who settled for first Master and reports to the United States Naval Academy in a few weeks to begin his collegiate shooting career, by an 1101-32 to 1100-21X margin.

Hap Rocketto is a Distinguished Rifleman with service and smallbore rifle, member of The Presidents Hundred, and the National Guard’s Chief’s 50. He is a National Smallbore Record holder, a member of the 1600 Club and the Connecticut Shooters’ Hall Of Fame. He was the 2002 Intermediate Senior Three Position National Smallbore Rifle Champion, the 2012 Senior Three Position National Smallbore Rifle Champion a member of the 2007 and 2012 National Four Position Indoor Championship team, coach and captain of the US Drew Cup Team, and adjutant of the United States 2009 Roberts and 2013 Pershing Teams. Rocketto is very active in coaching juniors. He is, along with his brother Steve, a cofounder of the Corporal Digby Hand Schützenverein. A historian of the shooting sports, his work appears in Shooting Sports USA, the late Precision Shooting Magazine, The Outdoor Message, the American Rifleman, the Civilian Marksmanship Program’s website, and most recently, the apogee of his literary career, pronematch.com.
View all posts by Hap Rocketto →
This entry was posted in Results and tagged Featured. Bookmark the permalink.