The 2014-2015 Rhode Island Indoor Smallbore rifle season has come to an end. This was a challenging year due to the number of storms causing a record number of make-up matches. When the season did finally end the competitors gathered at the Smithfield Sportsman’s Club to enjoy a dinner together and learn that South County Rod & Gun Club took top honor by compiling a 15-3 record for the season. Cumberland Beagle was able to secure second place and Smithfield Sportsman’s Club sneaked into third.

Al Thurn, firing for South County, had another impressive season. His 262 season average earned him a return to the top of the podium for the second year where he collect gold in the league’s individual awards. Cumberland Beagle’s Ed Jaques took silver, ending the season with a 248 average. Rounding out the top three and earning bronze was Ed’s teammate Dennis Gath. He averaged 240.

Rounding out the awards is the Most Improved award. This went to Smithfield’s Ken Olsen. His 230 average was 13 points better than his average from the 2013-2014 season. 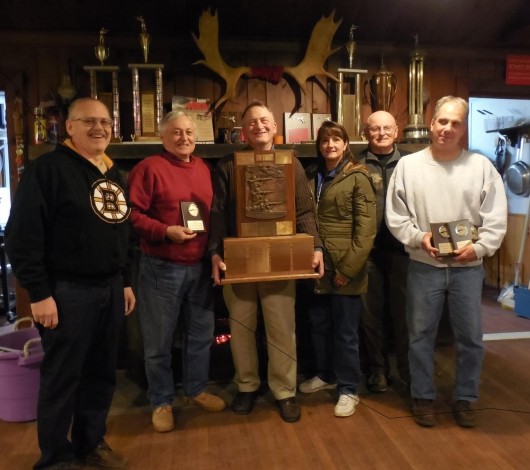 Joe Graf started shooting competitively as a junior in 1983 in both smallbore and high power rifle. After completing his junior career, he turned his attention to focus on smallbore rifle. In addition to shooting competitively, Joe has been the director of the RI Smallbore Rifle League since 1993, the Director of Smallbore Competition for RI State Rifle & Revolver Association since 2005, a member of the 2007 National Four Position Indoor Championship team, and Executive Officer of the RI State Rifle & Revolver Association since 2010. He is a National Record Holder, member of the Smithfield Sportsman's Club, the Blackhawk Rifle Club, and Digby Hand Schuetzenverein. He is a contributor to pronematch.com.
View all posts by Joe Graf →
This entry was posted in Results. Bookmark the permalink.