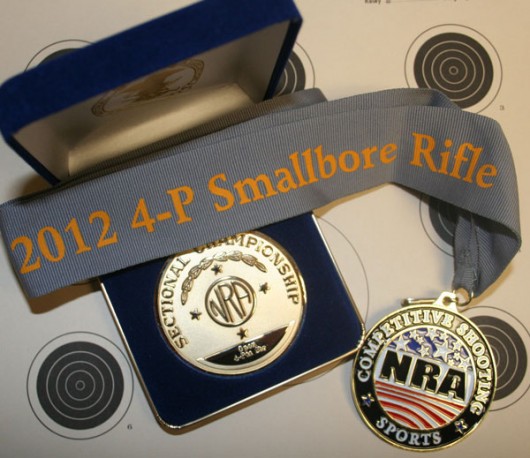 Ken Olsen and Liana Squeglia made their competitive debuts at the 2012 Ocean State NRA Conventional Sectional hosted by the Smithfield Sportsmen’s over the first weekend in March. It was quite an education for the pair. Olsen has been shooting for about a month, and Squeglia began shooting this past fall. They learned a good deal about match shooting and perhaps the most dramatic lesson was an unplanned lesson taught by Erik Hoskins.

After firing on of the five 200-20Xs posted in the prone match Hoskins was preparing for the standing stage when his rifle cart wheeled off of the shooting bench and crashed to the ground. Picking the rifle up, he made a quick examination and found no visible damage. However, past experience has taught him that it only takes the tiniest nudge on a scope to make a dramatic change in zero. Hoping for the best but prepared for the worst he carefully squeezed off his first standing sighter. A hole blossomed in the white at one o’clock just off of bull number six.

Hoskins then cranked on what he thought was the appropriate sight correction and again fired at the sighter only to see another hole in the white. His stomach dropped because he knew that NRA Rule 9.2.1(a) dictated that the errant sighter had to be counted as his first record shot-a miss. After more windage was added he was in the sighter and zeroed in. His next nine shots were eight center tens and a nine. He backed that up with a 98 on target two. Dealt a near fatal blow on his first standing shot he took it in stride and went on to go nearly clean for the rest of the day. For the two tyros it was a lesson in control that they would long remember.

With Hoskins deep in a hole the prone match winner, George Pantazelos, and the other 200-20X shooters Joe Graf, Hap Rocketto, and Ernst Renner began to battle it out standing for the lead. Rocketto took a sizable lead with a pair of 98s. Had Hoskins not had his trouble to pair would have been, in all likelihood, tied at this point. He did win high Master honors while Jenn Sloan topped the Experts. Graf had the best Sharpshooter score and Renner bested all Marksmen.

Pantazelos and Rocketto both opened the sitting match with clean targets and nine center shots. In the end Rocketto prevailed with a second clean target while Pantazelos dropped one and had to settle for first Master. This gave Rocketto an opportunity to attempt to regain the Senior National Sitting record he had lost the previous year. The old high power rifleman more than tripled the existing record. Sloan and Graf continued to dominate the Experts and Sharpshooters as Renner took a narrow victory over fellow Marksmen John Polseno and Dennis Gath.

Rocketto and Graf went head to head in kneeling with Graf winning with a score of 200-15X. Sloan again topped the Experts, Nicole Ladd was the best Sharpshooter and Renner continued on his run.

In the grand aggregate Rocketto took home the gold medallion with a 796-57X while Hoskins won silver by a sliver. He had not given up and managed to pull off a 783-62X leaving Graf with Sharpshooter honors by a mere 13 Xs. Sloan had the Expert medallion hung the about her neck and Renner cruised on to a Marksman Class victory.

In team competition Rocketto, Graf, Hoskins, and Pantazelos fired as the Digby Hand Black hawks and put up a score of 1578-87X. With a 1554-88X Sloan, Renner, Ladd, and Mark Wujtewicz shot as the Digby Hand Mohegans.