Notes from the Beach Tower at Camp Perry

The view from the beach tower at Camp Perry

The pronematch.com staff got a birds-eye view of Camp Perry today when they climbed the stairs to the range control beach tower. Located northeast of the ranges along the shore of Lake Erie, the Ohio National Guard tower personel use radar, forward looking infared radar, marine radios, and a computer to monitor the weather and impact area of Lake Erie. They also have access to a patrol boat when necessary.

The impact area is within a pie shape wedge centered at the tower extending out three miles into the lake and three miles along the shore west of the tower. Recently updated radar equipment allow the personel to view markers that designate the restircted area, boat and other watercraft in the area as well as wake of the traveling watercraft.

Once we reached the top of the stairs, we entered the enclosure and was provided a tour of the equipment used by the range control personel. We turned around and looked west and south of the tower and was greated with a spectular view of the firing ranges.

We would like to thank SFC Reynolds and SFC Ridner for allowing us the opportunity to view the range control beach tower operations. 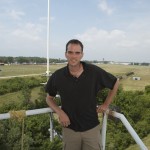 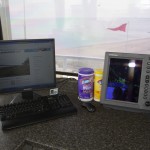 Even the tower guys check out pronematch.com 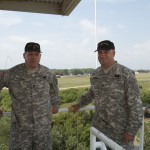 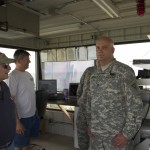 Hap Rocketto and Joe Graf with 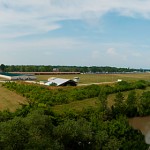 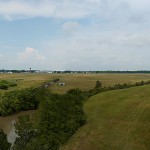 The view from the beach tower at Camp Perry

Joe Graf started shooting competitively as a junior in 1983 in both smallbore and high power rifle. After completing his junior career, he turned his attention to focus on smallbore rifle. In addition to shooting competitively, Joe has been the director of the RI Smallbore Rifle League since 1993, the Director of Smallbore Competition for RI State Rifle & Revolver Association since 2005, a member of the 2007 National Four Position Indoor Championship team, and Executive Officer of the RI State Rifle & Revolver Association since 2010. He is a National Record Holder, member of the Smithfield Sportsman's Club, the Blackhawk Rifle Club, and Digby Hand Schuetzenverein. He is a contributor to pronematch.com.
View all posts by Joe Graf →
This entry was posted in Camp Perry and tagged Featured. Bookmark the permalink.