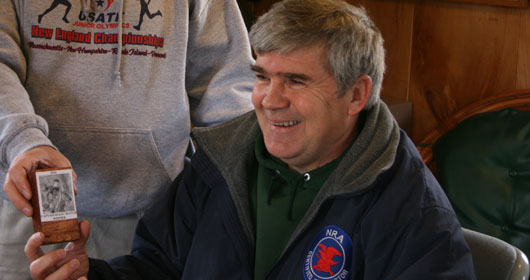 Larry Parker, Sr., was the match winner of the Isaac Wyman Prone Match conducted at the Cheshire County Fish and Game Club, Keene, NH.  It seems fitting that Parker should win a match named in honor of a Revolutionary War hero as he bears the same surname as Capitan John Parker, the militia leader who commanded the colonial troops at Concord Bridge where, as Ralph Waldo Emerson wrote, “once the embattled farmer stood, and fired the shot heard round the world.” .  While Larry Parker’s shots may not have been heard around the world he did he did shoot a near perfect score of  200-16X, with a 50-5X on his last bull-which may be his last outdoor bull of the year.

Rick Johnson was second with a 199-12X, Rick lost his only point on his first bull.  A score of 197-13X earned Peter Croteau high junior honors and intermediate  junior Alex Martin punched out a 196-11X to win his category.  Andrew Solomonides was the top scoring sub junior with a score of 196-9X.

Wyman again took up arms in defense of his state and nation during the Revolutionary war in which he participated in the Siege of Boston and the Battle of Bunker Hill. As colonel in the New Hampshire militia he supported the Continental Army in its retreat from Canada.  An aging Wyman was no longer fit for military service but he continued public service as a justice of the peace.   Wyman died on March 31, 1792 but his tavern lives on today a museum.

It was a sunny and gorgeous early New England day.  A light breeze made the 40 degree temperature seem a bit sharper, and in deference to the chill, the 29 competitors were allowed to use hand warmers if they so desired.  The course of fire was 20 shots in 20 minutes from the prone position with metallic or any sights on the A27 target.

History of the colonialists and area

In New England, Liberty has an April Birthday “The Shot Heard Around the World”

While, the rest of America celebrates independence in July, here in New England we recognize that liberty has an April birthday.

In high school, I was never interested in history: in fact, I think I slept through most of my American history classes. But walking the dusty road leading to Hartwell Tavern at the Minute Man National Historical Park in Lexington, Massachusetts one afternoon gave me a different perspective on the events that preserved its place in history.

For all the years I lived in and around Boston and Cambridge, I’d never actually set foot on this protected portion of the “Battle Road” where American militia clashed with British soldiers on April 19, 1775, an event that Ralph Waldo Emerson later immortalized in his “Concord Hymn” as “the shot heard  ’round the world.”

I didn’t have enough time to walk the five-mile Battle Road Trail, but I did take a quick stroll around Hartwell Tavern, the 18th-century home of Ephraim and Elizabeth Hartwell. The Hartwells’ home and tavern are surrounded by rolling pastureland snaked with stone walls and wide-spreading maples: quintessential New England countryside that makes for good sun-dappled walking.

Walking this road in the 21st century, you can clearly imagine what it might have been like to drive cattle along this same road in 1775; the pastured sheep I saw as I drove down Route 2A could just as well been grazing there centuries ago. This sun-dappled path with its fringe of trees and rock walls seems to exist outside of time: it’s a place where you’d feel content to live the rest of your days and then ultimately, in the fullness of time, come to lie down beneath a different sort of stone.

Realizing how peaceful and literally pastoral this landscape is, I began to realize what it was that those early militia, the so-called Minute Men, must have been fighting for. The Revolution surely wasn’t about abstractions such as taxes and tea; instead, the Revolution was about this lovely land that those long-dead fighters had come to call their own.

Walking down that quiet sun-dappled path, I couldn’t imagine it beaten by the tramp of British soldiers’ boots; for an army to despoil this quiet would have been an abomination. The men who raised their hand from the plow to take up arms were fighting for “country” in its most primitive sense: they were fighting so the tramp of British boots would no longer haunt the dreams of their sleeping babies or startle the cows who lay chewing their mid-summer cud in tree-fringed pastures.

It took great courage, I suspect, for farmers, merchants, and common laborers to take up arms against an organized army of their native countrymen. And yet strolling these paths among towering trees and snaking stone walls, I realize where they found such courage: they found it in these rocks, these trees, and these rolling hills which had stood for so long, even then, in mute testimony to nature’s all-enduring power.

Like a mountain that can’t be moved, those Minute Men stood firm, rooted in their adopted country, defending their right to home and hearth with a persistence that could not be denied. Some things (and some places) are worth fighting for: a peaceful home, a humble hearth, and one’s own quiet corner of God’s green earth being among them.

Closer to Home…
Since this walk, I’ve been itching to learn more about my own hometown’s remnant of the Revolutionary War history, the Wyman Tavern on Main Streetin Keene, NH.

Built in 1762 by Captain Isaac Wyman, the building served as a tavern for some 40 years, during which time it hosted in 1770 the first meeting of the trustees of Dartmouth College.   But Keene’s Wyman Tavern’s chief claim to fame, however, has to do with Keene’s response to the Battles of Lexington and
Concord where the Minute Men of Keene, NH, who were 90 miles north of the
conflict, likewise heard the call to take up arms.

In an age before telegraph and telephone much less fax machines, cell phones, and email, word of the conflict in Massachusetts quickly spread to New Hampshire. According to Upper Ashuelot: A History of Keene, New Hampshire, an anonymous rider immediately made the journey from Concord to Keene to bring news, arriving either late in the evening on April 19 or early the next morning.

There was no highway to Keene in those days, so the messenger had to follow a wooded trail marked by tree blazes beyond the end of the road in New Ipswich.

Upon reaching Keene, news of the Concord conflict spread rapidly: by April 20th, local diarist Abner Sanger noted that “Keene Town is in an Uproar. They warn a Musture [sic].”

In slightly more-than-a-Minute Man fashion, an assembly of Keene’s militia met in front of the town Meetinghouse on the afternoon of April 21. Warned that they would find few supplies on the way to Concord, the able-bodied men of Keene were instructed to gather their own provisions before embarking to Concord the next day.

On the morning of April 22, 1775, 29 men from Keene along with a handful of men from nearby Gilsum gathered at Wyman’s Tavern  to gather supplies before setting out on foot toward Concord on the Boston Road (now Baker Street).

Unimpeded by rain and muddy conditions, Keene’s militia men reached Lunenburg, MA by the afternoon of April 23; sometime the next day they were joined by militia from nearby Walpole, NH who had taken longer to muster both men and supplies. The leader of this Walpole contingent, Captain Bellows, remarked that “Keene has shown a noble spirit” when he learned how quickly his neighboring townsmen had gathered and set out to aid the colonists in Concord. The militia from Keene, Gilsum, and Walpole reached Concord on foot the afternoon of April 24, 1775 and were subsequently sent to Cambridge for military exercises. Armed with the weapons and ammunition they themselves had supplied, they had begun their on-the-job training as citizen soldiers.

These days, the thoroughfare once known as the Boston Road is called Baker Street: a barely-legible granite monument marks the head of this now-residential street as the start of the Keene militia men’s march to battle in Concord. These days, you’ll find elementary children walking to school on this street, or occasionally you’ll see a local college professor walking her dog. It takes more-than-a-minute to win any battle, but even the mightiest revolution starts with a single first step.

Dan Holmes started shooting competitive smallbore in 1986. During his Junior career, he earned two national junior team titles as well as local and regional wins. After a 10 year year hiatus to attend college and start a family, Dan returned to the sport and has added local, sectional and regional wins to his shooting resume. Dan is a Distinguished Rifleman, National Record Holder, U.S Dewar Team Member, Black Hawk Rifle Club Member, Digby Hand Schützenverein member, and is the founder of pronematch.com. He lives in Massachusetts with his wife and 2 children.
View all posts by Dan Holmes →
This entry was posted in Other Smallbore Information. Bookmark the permalink.