Posted on September 24, 2013 by Dennis Lindenbaum

The 2013 edition of the Georgia state smallbore prone championship was held on September 21 & 22 at River Bend Gun Club. It was a tale of two climates, and a predictable outcome, regardless of the weather. The iron sight matches were completed on day one under steadily increasing rain and dark skies. The wind was a non-factor, but some had difficulty with the low light conditions and the soggy terrain. It was interesting to watch the bullets splash their way to the berm after puncturing the soaked targets. The front moved through at the end of the metallic sight day and was followed by sunny, bright conditions with the usual wafting, breezy wind, typical of RBGC, on for the scope matches. Winds were light, however, and only required attention to keep shots in the X-ring.

Nineteen competitors participated with eight in Master class and eleven in the combined Expert/Sharpshooter class.

The first match each day was the Dewar competition followed by the 100 Yard match. Seven shooters fired clean scores to start the weekend in the calm, rainy conditions. By the end of the next match, 100 yards, only Eric Uptagrafft and Dennis Lindenbaum were clean at the day’s half-way point, but it seemed as if Lindenbaum trailed the U.S. Olympian by nearly 200 X’s, OK an exaggeration-but only a slight one. That was as close as it got for Uptagrafft as he continued to fire perfect scores for the rest of the weekend. At the end of day one, it was Uptagrafft with a clean 1600, followed by Tennessee’s Howard Pitts and Don Greene each, with 1598, and then Lindenbaum with 1597. The Expert/Sharpshooter class was won by Jimmie Fordham’s 1593 with Mike Encinas’ 1592 a point back with third going to Abigail Casey who fired a 1589.

Although the following day turned out to be warm and beautiful, it began with a fog so thick that the team matches were delayed and eventually cancelled to be replaced by a “paper match” using the scores from the first Dewar match of the day. Eight two-person teams vied for the winner-take-all loot. Three teams fired a clean 800, but it wasn’t close. The combo of Eric Uptagrafft and Mike Carter of Tennessee won with 73 X’s. Lindenbaum and Greene and Steve Hardin and Wayne Forshee were in arrears with 66 X’s each.

With scopes mounted atop most of the rifles, no less than eleven cleans were fired in the first match with every shooter in the Master class notching up one. This was not a day to drop if one wished to be competitive. Pitts took advantage of the situation and ran with it, shooting his first 1600. He was beaten by just four X’s by Uptagrafft who switched to iron sights to make the matches more challenging to himself. Joe Hall, Eric’s teammate from the AMU and 2013 Camp Perry 3-P champion, shot a 1599 for third place in anysight. Expert/Sharpshooter was taken with a 1598 by Mike Encinas, just edging Mark Skutle, who carded a personal best, by a few X’s. This has to be for Mark. Third place was won by Jimmie Fordham who carded a 1597.

After the scores were tabulated, Eric Uptagrafft’s 3200-286X emerged with the state championship with the first ever 3200 fired at River Bend Gun Club. It is no surprise that one of the best smallbore shooters in the world would be the one to claim primacy. Second place went to Pitts, 3198-259X, while Greene claimed third with a 3196-265X. Expert/Sharpshooter class top score was a 3190-244X posted by Fordham. Second was Encinas, 3190-198X, and Skutle’s 3185-203X placed third. Of extra special note was River Bend’s club president Steve Hardin who won the coveted Senior Championship who charged ahead on day two to win the honors by a single point on the back of his 3193-229X.

Thanks to Match Director Tommy Steadman, his beautiful bride Statistical Officer Linda Steadman in the statistical office, Scorer David Dye, and Range Officer Jim Hinkle who move things along with the efficiencies and attention to detail that one would expect of a magistrate judge and former Marine. Without the hard work of these individuals the weekend would not have been the well-organized event all experienced. 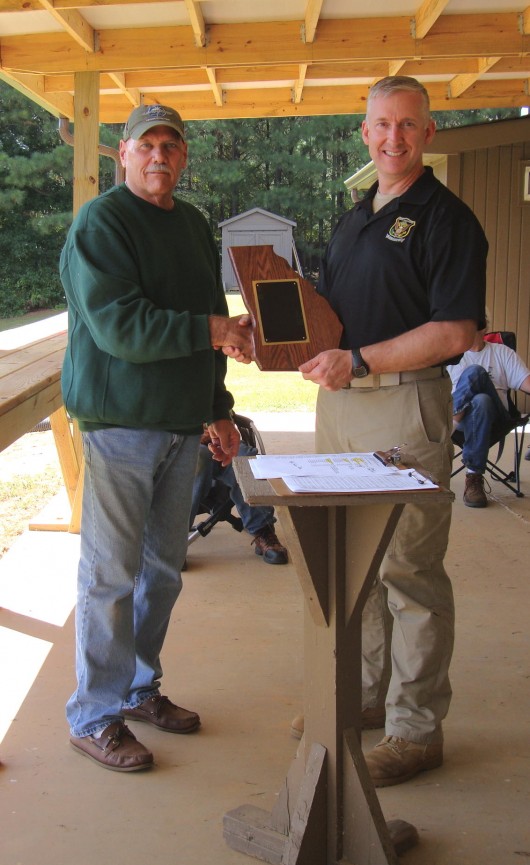 Dennis Lindenbaum began competitive shooting late in life starting with conventional pistol and then international 50 meter and air pistol events after a chance introduction to target firearms by a co-worker. The opportunity to lie on a mat while shooting, given his natural propensity for sloth, meant a switch to smallbore prone in 2008. A member of the Black Hawk Rifle Club and the 1600 club, he has been selected to the US Dewar Team. Dennis was a firing member of the 2010 National Championship Metallic Sight Prone Team. He assists with monthly smallbore match operations at River Bend Gun Club near his home in Marietta, Ga. Married, with two daughters, he earned a PhD from George Washington University and is a Clinical Neuropsychologist.
View all posts by Dennis Lindenbaum →
This entry was posted in Results and tagged Featured. Bookmark the permalink.