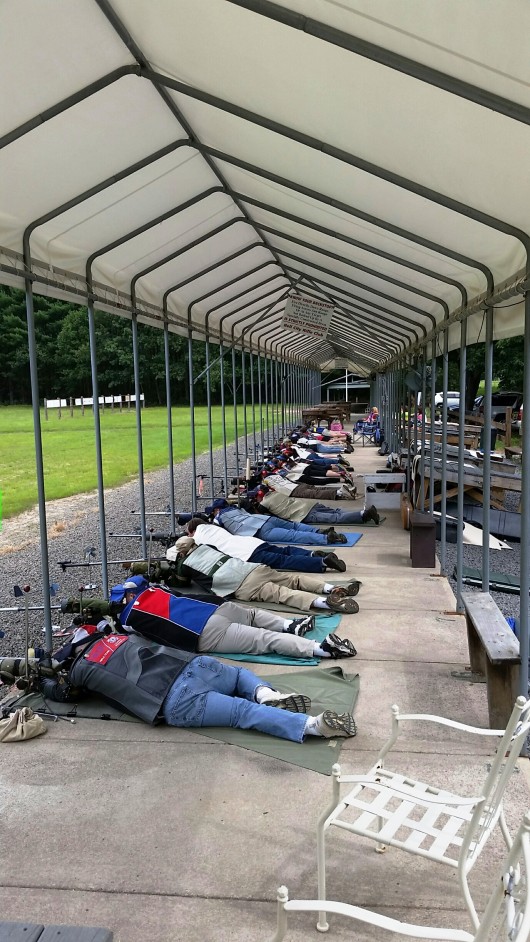 The 2015 Bell City NRA Metric Prone Regional was a bit of a family affair. Among the competitors spreading their mats on the Bell City firing line on June 27th were three sets of siblings, the Rocketto brothers, the Reynolds sisters and the brother and sister Davenports. Had the USAS championships not been in progress it is certain that Tony Cuozzo and Mike Acampora would have joined sisters Sophia and Emma.

Andrew Davenport, making a highly successful maiden appearance as a range officer, called the competitors to the line for the first match, 40 shots at 100 yards with metallic sights. With the top two shooters tied at 382 it was X count that determined the winner. and-wonder of wonders-it was Elias Davenport who accumulated 14 Xs to his sister Lily’s 13 giving him the early lead in the match. Lily had to settle for high Marksman.

Shawn Carpenter, who was returning to competition after a year long hiatus caused by, in keeping with the brother and sister theme of the match, him becoming the father of twins-Andrew and Laurel-took first Master with a 379-15X. Emma Acampora, whose bother Mike has posted a 606.5-25X at Fort Benning at the same time she was shooting in Connecticut, was high Expert/Sharpshooter.

With only 50 yards remaining Rocketto and Lily were knotted at 763 while Jeff Doerschler and Elias were tied at 761 and Carpenter sat on a 761. Young eyes prevailed at Lily shot a 391-25X to win the match, leaving her competition in the dust.

Steve Rocketto bested his brother and the rest of the Masters with a 388-18X, Elias, 375-9X, was top in the combined class and Joshua Lindgren topped the Marksmen with a 380-12X.

The strong finish gave Lil y the metallic sight aggregate with a score of 1154-53X. Brother Elias carded an 11-36-32X for combined class honors. Marksman Lindgren’s 1114-29X saw him earn Marksman honors. Doerschler, who had been cruising below the radar ended the day with a Master class high of 1147-40X.

Scope day promised to be a real dogfight as only 12 points separated the top five shooters. In a conventional match 12 points is almost in insurmountable lead but metric competition is a whole other story.

A heavy overcast, fog, and foreboding clouds delivered on a threat of rain and for most of the anysight match the competitors had to deal with a light drizzle which sometime broke in to short showers. The stat office kept a sharp eye on the weather. It was not out of concern for the shooters but because rain plays havoc on targets and can make them impossible to score. The shooters can dry off but soggy targets become papier–mâché.

Tony Cuozzo took on any sight range officer duties and used his authoritative policeman voice to maintain control over both the competitive and recreational firing lines.

Doerschler set the pace with a 398-18X at 100 yards, with his last card being a 98 followed by a nearly one hole knot in the ten ring on bull two. Remaly was high Master with a 386-12X that moved him up on Hap Rocketto in the aggregate. Carpenter struggled on his first bull and Lily stuck with iron sight situations which dropped them out of the race for the gold. Both Davenports took their classes.

Stepping up his game Doerschler took the Reverse Dewar with a score of 393-16X. Remaly was again high Master and continued to chase Rocketto and his 389-18X vaulted him ahead by three points. Cuozzo broke Davenport’s choke hold on the Sharpshooter class with an excellent 390-16X while sister Lily took another Marksman award.

Going into the final 40 shots at 50 yards it was Doerschler’s match to lose while Remaly and Rocketto, who was in a five point hole, were battling for the silver. A pair of 198s sealed the deal for the soft spoken engineer giving him the any sight title and gold medal in the aggregate with a 1179-59X and 2326-99X respectively. Remaly took Master honors and finished off Rocketto to win the silver medal 2306-89X to the bronze medal score of 2302-87X.