The 2015 Great Pumpkin
by Hap Rocketto 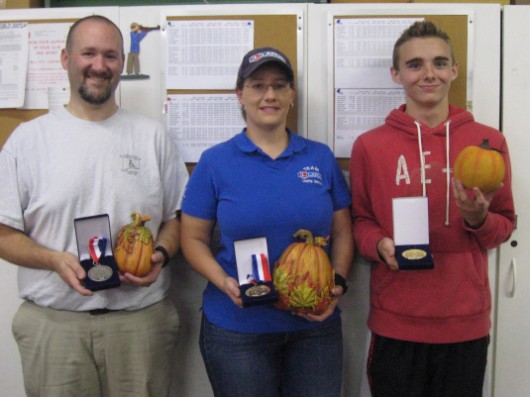 The shooting Gods tend to smile on the Great Pumpkin Match held annually at the Bell City Rifle Club. It was a typical early New England autumn day with a light cloud cover and the thermometer reading in the high 60s. But, the shooting Gods can be contrary and they decreed a light fishtailing wind to keep the firing line from becoming too complacent.

The line was packed with 35 shooters who came to the line for the first metallic sight match, 40 shots at 100 yards, at the sound of Range Officer Tony Cuozzo’s bullhorn amplified voice. The small end of bank of targets were in constant shade while the high end enjoyed brighter light.

The light did not seem to bother the seasoned veteran Len Remaly who put together two consistent strings, a 184-9X and a 195-8X, for a match winning score of 389-17X. Right on his heels was Shawn Carpenter who, not having shot since the National Championships at Bristol, posted a 386-11X for top Master.

With the targets still at 100 yards the first stage of the reverse Dewar began with Lisette Grunwell-Lacey putting up a 384-11X to win the match just ahead of three 380s that went down to Xs before Joe Graf’s 380-12 was confirmed as the Master class winner with Remaly and Carpenter knotted at 11Xs. Lynn continued his dominance in Expert with a 380-14X to keep Mike Acampora, 378-11X, at bay. Sharpshooter Elias Davenport swapped places nudging McAdoo out of first with a 378-8X.

Scott Condo and Dylan Lorence battled it out for honors in Marksman class with Condo coming out on top with a 380-8X to Lorence’s 379-11X. Sanctuary tightened his grip on the unclassified shooters with a 371-11X.

With the targets at 50 yards Marksman Sophia Cuozzo came out of nowhere with a 391-17X match winning score. Masters Grunwell-Lacey and Remaly both shot a 388-19X with Grunwell-Lacey edging out Remaly on the last bull of the 2nd stage to earn top class honors. Lynn and Acampora went to Xs with the New Hampshire judge’s 383-16X three Xs ahead of the junior. Davenport shot a solid 384-19x to best the Sharpshooters. Condo, 383-13X was top Marksman with Haley Reynolds carding a 380-14X for second place. Unclassified Sanctuary shot a near match winning 390-19X to best his peers.

When the scores were all totaled Remaly was declared iron sight champion with an 1157-47X. Luck was with the Bay State rifleman as family obligations had first make him cancel out of the match but things changed and he was able to shoot on the first day but spent the second day at the Big E shepherding his grandchildren through the rides and exhibits. With an 1151-42 Sanctuary took second and was fast on his way to leaving the ranks of the unclassified for the Expert class. Lynn was third overall with a 120 shot total of 1147-48X.

Carpenter took Master honors with his 1146-36X with Grunwell-Lacey in second place on the basis of a 1144-38X, just a single X in front of Graf. Acampora was high Expert shooting an 1135-30X to edge out second place Jeff Henry’s 1129-28X. Davenport shot a sold 1135-40X to win the Sharpshooter class. Condo beat Lilly Davenport by nine points, 1141-26X to 1137-29X, for the Marksman win. Kaitlyn Kutz was high unclassified shooting an 1131-29X. A 1138-36X had Steve Rocketto standing atop the seniors.
The day ended with a vintage fun match that proved both a fruitful activity for three shooters as well as a history lesson. At the Battle of Buena Vista on February 23, 1847 General Zachary Taylor ordered his artillery commander, Braxton Bragg, to continue firing with the command, “A Little More Grape Captain Brag!”
In a modern day tribute four grapes were taped to a target and placed at 50 yards. The 12 competitors were given five minutes to shoot four rounds with no sighters. Katie Gorlo, Ryan Horn, and Tobin Sanctuary each scored a perfect 4X4.

The fine weather continued as anysight competition got underway with Carpenter edging out Sam McAdoo, who had to settle for first Sharpshooter, in the 100 yard match 388-15X to 387-17X. Grunwell-Lacy posted a 386-20X for high master while Experts Bob Lynn and Caitlin McAdoo went head on head with 383s each and McAdoo prevailing 12 Xs to 10X.Dennis McMullen was high Marksman with Sophie Cuozzo and Dylan Lorence knotted up at 373 for second. Cuozzo’s 11Xs bested Lorence by five for second place. Kaitlyn Kutz started her run on Unclassified honors with a 385-15X.

A weak 100 yard stage in the Dewar cost Carpenter the lead as Grunwell-Lacy posted a 398-24X to win the match and join the small circle of 200 Pot winners when she cleaned the 50 yard stage. Master Jeff Doerschler shot a 396-16X to win class. Lynn and Dale Petty tied at 386 with Lynn eking out the win by a razor one X margin in the Expert class. Sam McAdoo’s 383-12X handily won Sharpshooter while Xs determined that Scott Condo’s 387 was three Xs better than Cuozzo. Kutz collected her second class win of the day with a 386-12X.

The anysight title went to Grunwell-Lacy who fired an 1174-60X. Masters Carpenter and Doerschler each compiled 1167-49Xs with the tie breaker going to Carpenter on the long range score tie breaker. Lynn’s 1156-44Xs topped the Experts while McAdoo took the Sharpshooter class with his 1157-42X. Condo, 1164-48X, was first Marksman with Cuozzo in second. Kutz completed her sweep with the aggregate win in the unclassified ranks, a class she will soon quickly leave behind.

The grand aggregate gold went to Grunwell-Lacy who amassed 2318-98Xs over the two days. Silver was firmly in Carpenter’s hands, 2318-85X, while Condo emerged from the depths of the Marksman class to claim the bronze with a 2305-74X. Joe Graff’s 2303-85Xs earned him the Master class win.

Experts picked up three awards, Lynn was High Senior, Caitlin McAdoo was top woman and Henry was the Expert class winner. Sam McAdoo won the Sharpshooter crown while Cuozzo was high Marksman and fellow Marksman Dylan Lorence claimed the junior title. In spite of an excellent any sight day Kutz yielded to Tobin Sanctuary for the best score in among unclassified shooters.

The day ended with a few good humored competitors competing in the Olive Match. Similar to the Grape Match the targets were pimento stuffed olives at 100 yards, six shots in three minutes. The olive had to be obliterated, like the dot on an NRA/USAS 50 target to be considered well struck. If the pimento was removed without disturbing the flesh of the fruit then it was scored a 10.9. Shawn Carpenter, Steve Rocketto, Jeff Doerschler, and Dylan Lorence were bunched in an unbreakable tie with each scoring a 1X4.

As with any well run match a cadre of volunteers lead by Range Officer Tony Cuozzo assisted by Tom Pasko, Roy McAdoo, Mrs. Flanders and Mr. Sanctuary made things flow smoothly for Match Director Nicole Panko. The statistical office was near perfect as the Jury, reflecting First Timothy 3.2 in The Good Book, only had to adjudicate one challenge, in which they decided on behalf of the competitor.

And so the 2015 outdoor season closed.

Dan Holmes started shooting competitive smallbore in 1986. During his Junior career, he earned two national junior team titles as well as local and regional wins. After a 10 year year hiatus to attend college and start a family, Dan returned to the sport and has added local, sectional and regional wins to his shooting resume. Dan is a Distinguished Rifleman, National Record Holder, U.S Dewar Team Member, Black Hawk Rifle Club Member, Digby Hand Schützenverein member, and is the founder of pronematch.com. He lives in Massachusetts with his wife and 2 children.
View all posts by Dan Holmes →
This entry was posted in Results and tagged Featured. Bookmark the permalink.