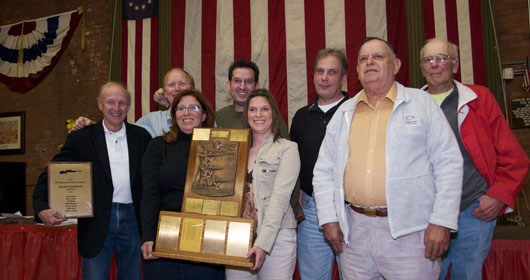 The Varnum Memorial Armory was the site of RI Smallbore Rifle League’s 2010 awards banquet. Attendees were able to tour the museum containing military firearms, uniforms, equipment, and artifacts from the 16th century to the present before enjoying their dinner.

The first award of the evening was the league’s Team Championship award, presented to the Varnum Rifle Team for record of 15-6. This ended Smithfield Sportman’s Club ten-year run as Team Champions. Next we moved to the individual awards, starting with the award for the highest overall average. Typically won by someone shooting with a scope, this year it was won by Kim Chrostowski using iron sights. Shooting for South County Rod & Gun Club, she ended the season firing a 289.67 average.

The High Open Sights (scope) award went to Erik Hoskins, representing Smithfield Sportsman’s Club, who fired a 287.68 average, while Ed Jaques from Cumberland Beagle Club had an average of 263.00. This earned him the High Senior (over 60 years of age) award.

Rick Dyer fired a 235.78, 27.24 points better than his average from last year to win the Most Improved award. The High on Team awards went to Ed Jaques of Cumberland, Erik Hoskins of Smithfield, Kim Chrostowski of South County, and Scott Lewis of Varnum.