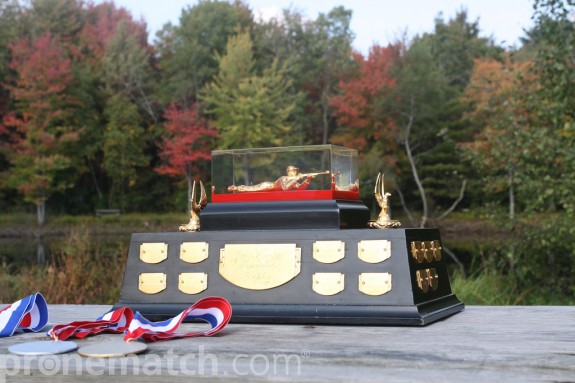 The much-coveted Jim Knapp Trophy, awarded to the winner of the Fall Foliage 3200 each year. This year's winner: Bill Neff

A leaden sky and a soaking rain, which was too late to help save the local tomato crop, greeted the competitors setting up for the Fall Foliage Regional at Hopkinton Sportsmen’s Association on October 4th. Either chance or the Machiavellian machinations of the match director saw the heavy hitters occupying the far right hand end of the line, next to the strategically placed free coffee and doughnuts.

New Jersey rifleman Bill Neff set the pace for the iron sight day with a 400-34X in the opening 50 Yard match. He was closely followed by junior Brian Jylkka’s 33X clean as well as perfect scores from Erik Hoskins, Justin Tracy, and Claudia Duksa. Neff rolled through the Meter Match with a 400-34Xs, with a clean from Duksa keeping up the pressure while Hoskins and Tracy each dropped a point. By this time, defending Knapp Trophy winner Hap Rocketto, was already into the free doughnuts to ease the pain of dropping enough points to place a repeat out of reach.

Tracy, a member of the United States Roberts Team, shot the only 400 in the Dewar. With the metallic sight title on the line, Neff, Hoskins, Tracy, and Duksa went into the 100 yard match down one point. Tracy was on a roll and again shot the only perfect score giving him a 1599-112X for the win. Neff was second posting a 1598-119X while Duksa survived a disastrous 100 yards, where she dropped six points, to hang onto third with a 1593-11X, just 12 Xs ahead of her father Rich. Hoskins also stumbled equally badly at 100 for a 1592-106 on the day. Jylkka closed out the top finishers with a 1590-114X.

”Where this is scope there is hope,” is the old shooting mantra that kept everyone on their toes and hope alive as the second day of the match began under clear skies. Tracy picked up where he left off and shot a near perfect 400-39X, one X ahead of Duksa and two on Hoskins. While it has been said that a nine on scope day on the 50 yard target has fathered more lies than all of the tax codes in history, Neff took his in stride. Neff was overheard after the 50 yard match saying “well if I can’t go clean today, I’m going to see how many Xs I can shoot!” Tracy again posted a 400-39X, this time in the Meter Match, while Neff showed that one misstep would not deter him as he posted a 400-32x. Hoskins and Duksa both dropped a point.

There were plenty of 400s in the Dewar match with Hoskins leading the pack with 38Xs followed by Tracy with 36Xs and Jylkka and Chet Ruscio with 34Xs. As the 100 yard Match began Tracy was cruising along in his sighter when, on the sixth shot, there was a ‘poof’ sound when he squeezed the trigger and his shot of Eley Black dropped into the five ring at 6 o’clock in his first record bull! His chance of winning the match disappeared as fast as the smoke from his barrel in the wind. To his credit he carded a 200-18X on his second card. Ruscio’s 400-33X won the 100 yard match with Erik Hoskins and Jeff Doerschler each shooting a 400-32X for second and third respectively. Hoskins rebounded from a less than satisfactory iron sight score to win the any sight match with a 1599-140X. Duksa was second with a 1599-130X while Neff was third, posting a 1599-127X.

Neff, shooting his “steam powered Winchester 52,” emerged the winner of the regional with an outstanding 3197-246X. Tracy had built up enough padding to stay in the running after his bit of bad luck, and was awarded the silver medal for his 3193-257X while Duksa, the reigning Connecticut State Champion, took home bronze with a 3192-248X.

Dan Holmes started shooting competitive smallbore in 1986. During his Junior career, he earned two national junior team titles as well as local and regional wins. After a 10 year year hiatus to attend college and start a family, Dan returned to the sport and has added local, sectional and regional wins to his shooting resume. Dan is a Distinguished Rifleman, National Record Holder, U.S Dewar Team Member, Black Hawk Rifle Club Member, Digby Hand Schützenverein member, and is the founder of pronematch.com. He lives in Massachusetts with his wife and 2 children.
View all posts by Dan Holmes →
This entry was posted in Fall Foliage Match and tagged Digby Hand, Results. Bookmark the permalink.