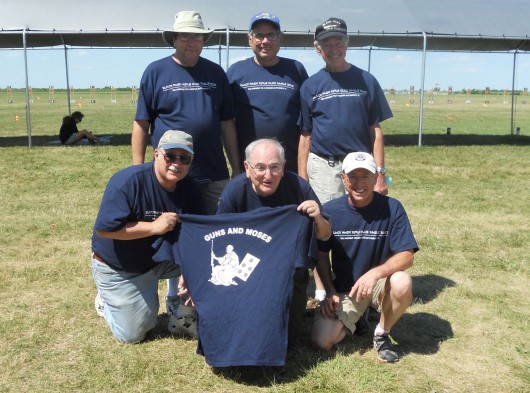 (7/26/11, CAMP PERRY, OH) The Black Hawk Bagel Boys, the first and only team composed solely of Jewish riflemen to compete in the National Smallbore Rifle Prone Championships, poses on the line after their historic appearance. Randy Schwartz, Steve Rocketto, and Don Lerner stand while the kneeling Hap Rocketto, Larry Hoffman, and Dennis Lindenbaum display the logo on the back of the team’s shirts.

Each year for the last three I have given notice where I am dutifully employed that I will be gone for a week in late July. “Going on vacation?” “Yeah…sort of” “Where are you going?” “Ohio.” “Very funny. Where are you really going?” “Well, Lake Erie. It’s in Ohio”. “Oh. Have a good time.” And the person usually walks away feeling sorry for me for wasting a perfectly good week of vacation time. Turning back the person then asks, “You’re flying, right?” “No, driving. We have too much stuff we’re taking” and now they believe I have completely lost all my faculties.

For me the excitement begins to build the beginning of April when the online application for the National Championships makes its first appearance. Last year, I was 4th to register. Although hoping to improve, I had a much poorer showing this year when I was distracted by other activities during the first day of open registration and dropped to 14th. Little did I know that this was just a foreshadowing of events to come.

For those who have attended the National Rifle and Pistol Championships at Camp Perry in July-August, no explanation is needed and you can skip the rest of this paragraph. I have yet to meet someone who has attended only once. It is an infectious experience like no other and compels participants to put aside all good sense and return year after year. Individual and team matches each day for nearly a week in the discipline of your preference – pistol, smallbore, highpower, service rifle and more from distances of 25 yards to 1000 yards (10 meters if you shoot air rifle in the new state-of-the-art air gun range). The national matches have occurred almost uninterrupted for over 100 years making Camp Perry the Mecca for NRA shooting sports in this country.

While the shooting always presents an opportunity to compete against those at the highest levels of skill and talent, the competition essentially remains an individual journey to pursue one’s own goals and to push prior limits to new levels. What other sport offers the opportunity to compete side by side with national champions and Olympic medalists? Just imagine bringing your golf clubs to the U.S. Open or your cleats to the Super Bowl. The venue is also unlike any other – the vast open range with several hundred firing points; blustery winds off Lake Erie; ceasefires for lightning strikes, eagles on the course, or wave riders in the lake.

One immediately makes lifelong friends and these relationships are instantly rekindled each year when you see one another again. If you happen to be shooting well that week, alcohol intake needs to be managed effectively at the various social gatherings that occur each day after the matches are completed. If you’re not shooting so well, then the refreshments are a good diversion. Credit cards are tapped out at the oversized shooting supply kiosks that spring up for the month. All the needed and not-so-needed items we see in catalogs throughout the year are displayed by the vendors to entice us into debt. It’s Christmas in July. I decided to complete all my purchases this year right after check-in and just before the lightning strikes blacked out the range and shut down computer systems for several days putting a temporary end to all new purchases.

After check-in and final registration, squadding points and relay assignments are obtained. It’s then over to the range to scope out your firing point and determine where you will be huddled for the week Competitors arrive in various groups and affinities and literally set up base camp operations erecting tents and small dwellings of all shapes, sizes and colors. Many have signage indicating shooting clubs and organizations from home. River Bend Gun Club needs some signs because our club was very well represented during Smallbore Prone week when I attended. The group included Tommy Steadman, Jim Hinkle, Steve Hardin, Mark Skutle, Wayne Forshee, Vince Greiner and me. A few others had to cancel and I expect next year to see more members in attendance.

The following day is scheduled for a brief practice session in the afternoon, an opportunity to feel the ground and shake out your equipment. I find that my settings from home bear little resemblance to what is required at Perry. Spotting scope, rear-sight settings and mat placement all need tuning so it helps to shoot a few targets in practice. My firing point this year had a significant slant forward and to the side and really needed a front-end loader to make it comparable to the concrete slabs I know so well.

Because of poor weather the day before, events on practice day were pushed ahead to late in the afternoon. As I was on Relay Two, this meant that the daily afternoon weather system had a chance to re-deploy and, with more lightning in the area, a cancellation of practice for my relay. With total evacuation of the range, set-up for the match would be limited to the three minute preparation period at the start of individual competition the next morning. Those three minutes would go particularly fast and I learned to never again wait until the practice session to assess my assigned point.

The national smallbore rifle prone championships consist of two days of metallic sights, a day of team matches, and two days of any-sights. Five days that goes by in a blur with lots of bits and pieces in between. It’s hard enough to keep track of your own activities let alone those of others. As a result, I can only describe a few events that stood out for me. Each person has their own story to tell and I would suggest asking others to describe their experiences when you see them.

I had good results in 2010 and arrived with hopes and aspirations. I left the matches this year with many lessons learned and fewer hopes realized. The year of training and countless hours of practice to shoot well are necessary, but not at all sufficient. One has to pay attention to all the processes and details from start to finish. For example, I take some pride in never having crossfired on another target, something that is so surprisingly easy to do that precautions are taken at every match. A blank target paper is hung behind your target to detect such occurrences. Pretty simple unless you hang a backer on the back side of a piece of thin masonite instead of the front. This produces something similar to a large shotgun blast through the paper rendering it useless in doing its intended job. When this happens on the first target of the first match of the first day AND there is a crossfired shot on your target, you may incur a two-point penalty in a sport where much less defines success or next best. I am glad for the opportunity to never make that mistake again.

The scorers this year did a remarkable job marking my targets. That means I had no challenges to make after the scores were posted. To aid data entry, labels are carefully affixed to each target denoting competitor number, firing point, match, etc. This is the method required to match each individual to the shots he fires. Pretty routine and straightforward. So when you fire a clean 20 shot match at 100 yards on team day, you’re a bit confused when you get credit for 0 points instead of 200. Well, apparently dyslexia is not an accepted excuse in the NRA program guide even with a doctor’s note. For example, a competitor number of 5014 is not interchangeable with 5104. Close doesn’t count and I want to thank the NRA for giving me the opportunity to never transpose numbers again.

Going into the final day of competition, I somehow managed to find myself tied for the Intermediate Senior National Championship and had a “lock” for my fourth and final Distinguished Leg. Things were going exceedingly well and after 80 shots and no misses I was having a blast and feeling quite confident with just 40 to go at short range.

Parallax Adjustment and Head Position. This is the title of a seminar I plan to attend next month. Without it, shots can go places you’d wished they hadn’t. A few minutes that seemed like an unreal event happening to someone else yielded 11 nines, as good as a miss in a smallbore prone match, nearly the exact same number collected for the entire week. Although no leg points or pretty trophies were to be had, I am thankful for the science of optics and the opportunity to see things correctly in the future when I adjust my rifle scope.

Port Clinton provides opportunities to learn of new places to eat each year, this being my third. However, there is really only one place for ice cream. Nightly runs to Toft’s were the rule and the adolescent workers behind the counter were almost sad to see us leave after our last night. I am fortunate to have my wife, Barb, with me at most matches I attend and the week at Perry was no exception. She understands the Perry experience as well as anyone. It wouldn’t be the same or as good without her. She’s been right there for all the highs and lows from climbing the steps to the awards stage or picking me up after disappointment. We shared a condo on the lake with Linda and Tommy Steadman as well as Jim Hinkle. This was a great arrangement with first class accommodations providing ample opportunities to commiserate, hash out dinner choices, and plot strategies for each day.

In 2009, my memories were of everything being new and undiscovered. In 2010, I left with great excitement over my shooting accomplishments. This year I bring home a few lessons learned and many great personal experiences thanks to the great cast of characters that populate the Perry campus. With each year the class list expands. I can add my brothers from the Black Hawk Bagle (sic) Boys who shot the team matches for the first and last time and young Joe Nikiforakis from New Hampshire who so kindly asked me to shoot the Mentor Match with him. If you have read this far and have never been to Perry, you’re missing something special and owe it to yourself to go. To everyone else, I’ll see you next summer.

Dennis Lindenbaum began competitive shooting late in life starting with conventional pistol and then international 50 meter and air pistol events after a chance introduction to target firearms by a co-worker. The opportunity to lie on a mat while shooting, given his natural propensity for sloth, meant a switch to smallbore prone in 2008. A member of the Black Hawk Rifle Club and the 1600 club, he has been selected to the US Dewar Team. Dennis was a firing member of the 2010 National Championship Metallic Sight Prone Team. He assists with monthly smallbore match operations at River Bend Gun Club near his home in Marietta, Ga. Married, with two daughters, he earned a PhD from George Washington University and is a Clinical Neuropsychologist.
View all posts by Dennis Lindenbaum →
This entry was posted in Camp Perry, Other Smallbore Information. Bookmark the permalink.