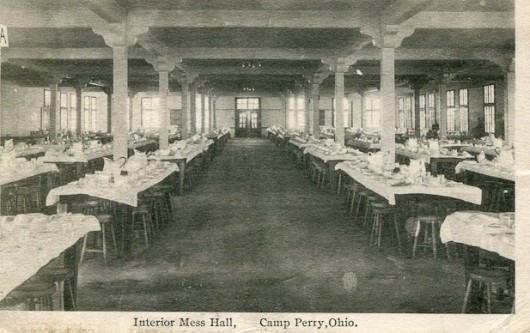 (CAMP PERRY, OH, DATE UNKNOWN) An interior view of the the long gone and lamented Mess Hall of Camp Perry. The Mess Hall was damaged during a tornado in 1998 and was eventually torn down. CLICK PHOTO TO ENLARGE.

The Camp Perry Dining Facility, building 1738, more popularly known as the Mess Hall, was dedicated to the memory of Private First Class Joseph J. Cicchetti, Company A, 148th Infantry, 37th Infantry Division on July 23, 1954. PFC Cicchetti was awarded the Medal of Honor for organizing a litter team and skillfully leading it for more than four hours in rescuing 14 wounded men on February 4, 1945 on the Philippine Island of Luzon. He constantly passed back and forth over a 400-yard route which was the impact area for a tremendous volume of the most intense enemy fire. He was mortally wounded during the action. By his skilled leadership, indomitable will, and dauntless courage, Pfc. Cicchetti saved the lives of many of his fellow soldiers at the cost of his own.

Ground was broken for the building in 1908 and it was completed in 1909. The building was constructed by erecting precast concrete walls, one of the first buildings to ever be built using this method. The two story structure, 196 by 132 feet, could accommodate 1,000 in the first floor dining area. The second story, built without any internal supports, was given over to an assembly hall which was later subdivided for office space.

From its opening until severely damaged by a tornado on June 24, 1998 it served up meals for untold numbers of soldiers undergoing training and shooters attending the National Matches.

A more detailed description, from contemporary news reports, may be found in Camp Perry 1906-1991 and Camp Perry Revisited 1905-1996 by the late Anna L. Bovia.