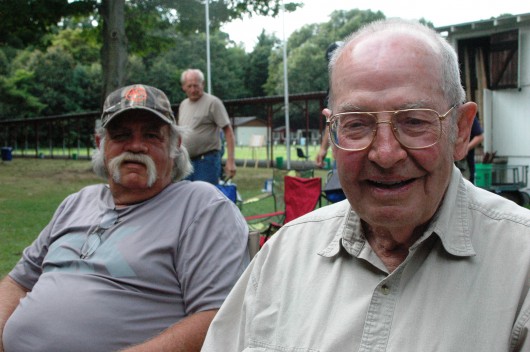 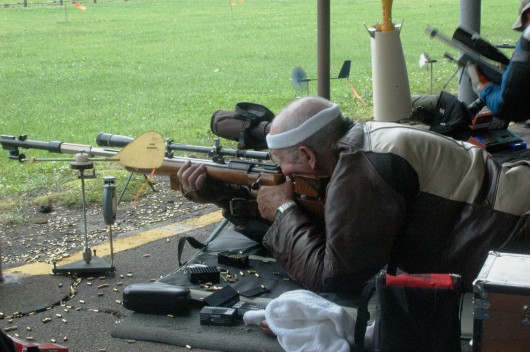 Joe Farmer, who passed away on April 30, 2017, was raised in Rifle, Colorado and, perhaps, that is all that might need be said about this outstanding octogenarian rifleman, but the story is more involved then that simple fact.

As a young man he found himself in Chicago working as a laborer in the mid 1950s. Wishing to improve himself, and get out of the harsh Chicago winter weather, he applied for a tool and die apprenticeship at the Ford Motor Company. Accepted, he began a career in machine tool manufacture and machine tool design that would pay dividends in his pursuit of smallbore excellence. Apprentice school taught him the mechanical skills necessary to be his own gunsmith and the attention to detail so necessary for success at the highest levels of competition.

Taken under the wing of Berwyn Coffin in 1956, and later Stan Patla, a noted Midwestern prone rifleman of the day, Farmer soon was shooting regularly.

The left-handed rifleman began with a Remington Rangemaster Model 37. Unfortunately, the classic target rifle introduced officially in 1937 only came in a right-handed version. Farmer equipped the rifle with an electric bedding device-a practice he continues to this day-and successfully campaigned the 37. He later added a second 37 to his stable and barreled them with Clyde Hart and Douglas barrels. Looking towards a more comfortable position he experimented with a BSA Mark II and, after much research, hard work, and experimentation got it to shoot well enough to meet his exacting standards.

Farmer returned to Colorado in 1961 and fell in with noted rifleman Herb Hollister, a wealthy radio station owner. Hollister traveled to matches in a motor home and, not particularly fond of piloting the big vehicle, asked Farmer to accompany him and serve as driver. During the many hours they spent together motoring about the southwest to various rifle matches Farmer absorbed all he could about shooting, and life in general, from the gentlemanly Hollister. He credits Hollister with teaching how to comport himself both on the range and elsewhere.

In the ensuing years Farmer developed into an excellent prone shot. As an Expert he placed sixth in class at Camp Perry. As a Master he was ranked 12th civilian Master at Perry in 1967, no small feat in a National Smallbore Prone National Championship when there were 648 competitors on the line and more than 300 were Masters. He also notched his first 1600 the summer of ’67.

Farmer competed at the highest level but over time his intense desire to win and his exacting personal standards took a fearsome toll. He had burned himself out and put his rifle away in 1975 to concentrate on his career as the Manager of Tool Engineering at the Rocky Flats Plant, a nuclear weapons production facility. He did a little trapshooting, but never pursued it seriously as he felt he did not have the aptitude for the sport.

Just as the hero of Washington Irving’s classic eponymously titled short story Rip Van Winkle disappeared into the Catskill Mountains only to return after more than two decades so it was with Farmer and the Front Range of the Rocky Mountains.

Sometime during 2004 Farmer came across a photograph of Lenore Lemanski posing at Camp Perry with her rifle. The photo showed a teenaged Lemanski at the start of an outstanding shooting career which included multiple national women and collegiate prone titles, membership on the Dewar Team, and a mind boggling 30 appearances on the Randle Team. The picture revived his interest in smallbore prone and relit his competitive fire.

At a time when most are hanging up their rifles the 75-year-old Farmer took his BSA out of storage, fitted it with a 30″ Lilja six groove 16″ twist barrel, and began to practice. He contacted his old running mate Barney Higgins and the two soon began to shoot the southwest prone circuit ranging as far afield as Amarillo, Texas and Raton, New Mexico. It was a bit of déjà vu for Higgins took on the driving duties, much as Farmer had done with Hollister, while Farmer mentored Higgins.

Within a few years Farmer was again at the top of his game and, in 2009, at 80, won the Colorado State Smallbore Prone Championship and set a number of smallbore records. He was the first to clean the any sight Metric Dewar firing a score of 400-26X. He later teamed up with Lones Wigger to set a new senior conventional Dewar anysight record of 800-65X, the team’s average age was 76, and the score was just 12Xs below the Open Record.

During the summer of 2010 he and Higgins packed up their gear and headed east for the inaugural Metric National Championship at Bristol, Indiana, and the Nationals at Camp Perry in his friend Cal Cooper’s motor home. Over the next few years they reacquainted themselves with National Championship competition.

In 2011 Farmer stunned the field when he shot himself onto his first Dewar Team. At the tender age of 82 he became, in one fell swoop, both the oldest person to make the team and the oldest competitor to make his maiden appearance on the prestigious team.

Farmer traded up from his faithful old BSA to a left-handed Bleiker action set in a stock he made himself in 2013. A Centra spy rear sight and Freeland front are used for metallic sight competition and a Lyman Super Targetspot in 30 power for anysight matches. Unlike many other top shooters he does not test his ammunition but simply orders three cases a year of Eley Match, at his favored speed, to keep up with his extensive training and match schedule.

Some say that Farmer’s success is due to his 20/10 vision and willingness to do the hard necessary work of training which he claims is no hardship for him. He loves to train and as proof every other day, year around, he repairs to the range right outside of his home, some 7,200 feet up in the mountains, to shoot 60 to 90 rounds in the wind at 100 yards. While he agrees that hard work pays off Farmer adamantly pins his success firmly on the unfailing support and devotion of his wife of 63 years, Corinne.

So, whether it is hard work, the support of a good woman, or a combination of both, it seems to work for Joe Framer, and who are we to argue with such a successful distinguished elder of the sport?