The anysight championship opened with a another set of 400-40Xs posted by match winner Shawn Carpenter and Mark Gould and Hank Gray.

Carpenter continued his tear with a 400-39X followed my matt Chezem. Unfortunately the story must abruptly end here to be continued because our cub reporter Joe Graf was involved in the metallic sight team match and was unable to complete his data gathering duties due to circumstances beyond his control.

The team match was conducted after the end of the daily 6400 but was delayed as Gould elected to make a run on the National 50 Yard prone record of 400-40X with 165 additional Xs established by Mary Stidworty Sparling in 1976. The tram match moved along under the threat of heavy rain, lightning, and thunder. The last shot had been fired as the heaven’s opened up with a deluge of Biblical proportion. Graf scurried about protecting his equipment and was unable collect the scores.

To ease the disappointment we will reveal the roster of the 2017 US Roberts Trophy Team which will travel to England next summer. The team was selected based on an aggregate of the metallic sight aggregate and the score fired in the Dewar Trophy Postal Match. The 12 riflemen will be Eric Uptagrafft, MarK Delcotto, Kerry Spurgin, Matt Chezem, Howard Pitts, Bill Azzinaro, Hank Gray, Morgan Dietrich, Mike Seery, Kevin Nevius, Shawn Wells, and Mike O’Connor. The team will be led by Captain Tom King, Coach Lones Wigger, and Adjutant Hap Rocketto.  Wigger, Rocketto, Delcotto, Gray, and Nevius are veterans of the 2009 team and are looking to even the score after being soundly beaten by the British. 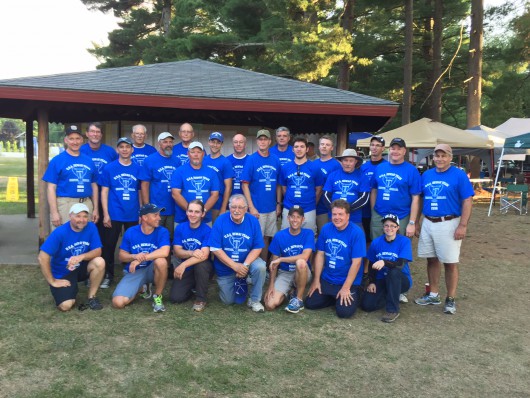 Hap Rocketto is a Distinguished Rifleman with service and smallbore rifle, member of The Presidents Hundred, and the National Guard’s Chief’s 50. He is a National Smallbore Record holder, a member of the 1600 Club and the Connecticut Shooters’ Hall Of Fame. He was the 2002 Intermediate Senior Three Position National Smallbore Rifle Champion, the 2012 Senior Three Position National Smallbore Rifle Champion a member of the 2007 and 2012 National Four Position Indoor Championship team, coach and captain of the US Drew Cup Team, and adjutant of the United States 2009 Roberts and 2013 Pershing Teams. Rocketto is very active in coaching juniors. He is, along with his brother Steve, a cofounder of the Corporal Digby Hand Schützenverein. A historian of the shooting sports, his work appears in Shooting Sports USA, the late Precision Shooting Magazine, The Outdoor Message, the American Rifleman, the Civilian Marksmanship Program’s website, and most recently, the apogee of his literary career, pronematch.com.
View all posts by Hap Rocketto →
This entry was posted in Camp Perry. Bookmark the permalink.