A Short History of the Presidents Hundred 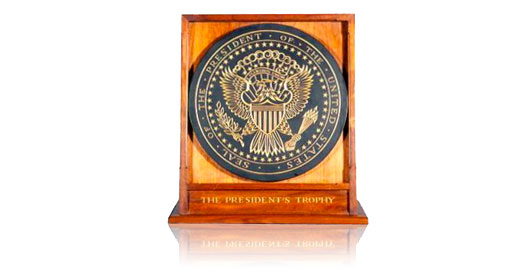 The President‟s Rifle Trophy, purchased by the NBPRP in 1977, consists of a disk of black New England slate mounted on a hardwood base. The Presidential Seal is carved on the disk and gilded.

As the sun slants in from three o’clock and glints off of the brass cartridge cases as they click into the magazine the shooter, readying for the President‟s Match, is not thinking about history. Yet history is all about at Camp Perry and if one ignores it one ignores the very essence of the sport. To understand why the President‟s Match Trophy, and by extension, the Presidents Hundred, has such a special aura in a trophy room full of venerated shooting icons it is only necessary to let your mind travel 4,000 miles east and nearly 150 years back in time.

Hap Rocketto is a Distinguished Rifleman with service and smallbore rifle, member of The Presidents Hundred, and the National Guard’s Chief’s 50. He is a National Smallbore Record holder, a member of the 1600 Club and the Connecticut Shooters’ Hall Of Fame. He was the 2002 Intermediate Senior Three Position National Smallbore Rifle Champion, the 2012 Senior Three Position National Smallbore Rifle Champion a member of the 2007 and 2012 National Four Position Indoor Championship team, coach and captain of the US Drew Cup Team, and adjutant of the United States 2009 Roberts and 2013 Pershing Teams. Rocketto is very active in coaching juniors. He is, along with his brother Steve, a cofounder of the Corporal Digby Hand Schützenverein. A historian of the shooting sports, his work appears in Shooting Sports USA, the late Precision Shooting Magazine, The Outdoor Message, the American Rifleman, the Civilian Marksmanship Program’s website, and most recently, the apogee of his literary career, pronematch.com.
View all posts by Hap Rocketto →
This entry was posted in Shooting Histories and tagged Featured. Bookmark the permalink.