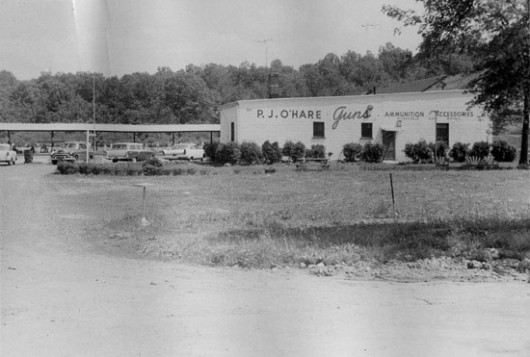 For old time mid Atlantic shooters the PJ O’Hare gun store and range in Roseland, New Jersey was a favorite for many years until it closed in the mid 1980s. The business was started by Patrick J. O’Hare in the early 1900s. From time to time matches would be halted at railroad cars would be shuttled past behind the impact area. After Paddy’s death his son Francis ran the business with the assistance of noted Randle Team member Winnie Carr.

The soft-spoken Paddy O’Hare of the Irish brogue was better known to the shooting fraternity at large than any other of the thousands who have left their mark on the target shooting game of this country. He was the Al Freeland of his time. O’Hare never missed a firing of the National Matches since their inception in 1903 until he passed away in 1938. At Camp Perry, Paddy’s ruddy, friendly face became an institution.

O’Hare came to America before the turn of the last century and his shooting career dated far back of the first National Match in 1903. It was a time when small bore shooting was unknown and when it developed he was selected as a member of the first U.S. Dewar team.

Born in Ireland, Paddy’s life bridged a significant period of U.S. target shooting history. His 71 years spanned the growth from Creedmoor to Camp Perry, from the Krag to the Garand, and the Golden Age of smallbore.

Best known to the non-traveling element of the shooting fraternity through the familiar yellow-backed catalog of shooters’ supplies, in which were listed all of the little gadgets that no one else could supply, most notably the O’Hare Micrometer without which no self respecting ‘03 rifleman would be seen. Paddy’s late years were spent as an importer and manufacturer of shooting equipment.

The picture was provided by Ken Meise who also wrote, “I use to go to the store often. As you walked in there were large compartment tables with clothing either side and the counter was located straight back with rifles along the back wall. There was a side door to the loading platform and range with an office to the right inside the store. Frank Boyd and Winnie Carr often were there but mainly Winnie. Fran, Paddy’s son, was a good salesman and Jack, Paddy’s grandson, was more quiet type but both very nice folks. Frank Boyd was a big guy….to a kid of 15. Winnie was outspoken, but again a nice person once you got to know her. I knew her in her older age.

Hap Rocketto is a Distinguished Rifleman with service and smallbore rifle, member of The Presidents Hundred, and the National Guard’s Chief’s 50. He is a National Smallbore Record holder, a member of the 1600 Club and the Connecticut Shooters’ Hall Of Fame. He was the 2002 Intermediate Senior Three Position National Smallbore Rifle Champion, the 2012 Senior Three Position National Smallbore Rifle Champion a member of the 2007 and 2012 National Four Position Indoor Championship team, coach and captain of the US Drew Cup Team, and adjutant of the United States 2009 Roberts and 2013 Pershing Teams. Rocketto is very active in coaching juniors. He is, along with his brother Steve, a cofounder of the Corporal Digby Hand Schützenverein. A historian of the shooting sports, his work appears in Shooting Sports USA, the late Precision Shooting Magazine, The Outdoor Message, the American Rifleman, the Civilian Marksmanship Program’s website, and most recently, the apogee of his literary career, pronematch.com.
View all posts by Hap Rocketto →
This entry was posted in Photo of the Week and tagged Featured. Bookmark the permalink.

9 Responses to Photo of the Week