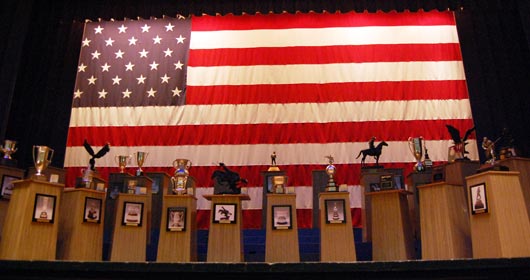 We at pronematch.com really have no interest in becoming the smallbore fashion police…really we don’t. But, we’ve been a little surprised at some of the clothing that has found its way on stage at the National Match awards ceremonies over the last few years.  Blue jeans, shorts, t-shirts, sneakers, and baseball caps are just a few of the articles of clothing that have graced the awards stage of Camp Perry past. All we can say is….seriously? The NRA  provides instruction to shooters on attire in the National Match Program if you need a little guidance for this coming summer:

1A-17. HELP YOUR SPORT – WEAR PROPER ATTIRE:
In keeping with the tradition established by NRA in shooting events, and recognizing the publicity attracted by the National Championships, it is important to promote an acceptable image for competitive shooting. Attire worn during all phases of the Championships should be in good taste and appropriate to such a prestigious sporting event. Articles of clothing with controversial or offensive slogans or illustrations are prohibited. The Match Director is empowered to take whatever action is necessary to maintain acceptable clothing standards. IT IS ESPECIALLY IMPORTANT TO WEAR PROPER ATTIRE WHEN RECEIVING AWARDS ON STAGE AT THE AWARDS CEREMONIES. AWARD RECIPIENTS ARE ENCOURAGED TO WEAR SLACKS AND A COAT FOR MEN, AND COMPARABLE APPROPRIATE ATTIRE FOR WOMEN.

We’ll end the rant here, but when you’re packing up your stuff for Camp Perry this summer (or any event with an awards ceremony) don’t forget to bring something nice to wear for when you go up on stage. If you’re not sure if you’ll be called up on stage, wear something nice anyways!

Oh and the ISSF had a detailed interpretation of their rule on shooter dress code posted on their website, if you’re interested.

Dan Holmes started shooting competitive smallbore in 1986. During his Junior career, he earned two national junior team titles as well as local and regional wins. After a 10 year year hiatus to attend college and start a family, Dan returned to the sport and has added local, sectional and regional wins to his shooting resume. Dan is a Distinguished Rifleman, National Record Holder, U.S Dewar Team Member, Black Hawk Rifle Club Member, Digby Hand Schützenverein member, and is the founder of pronematch.com. He lives in Massachusetts with his wife and 2 children.
View all posts by Dan Holmes →
This entry was posted in Other Smallbore Information and tagged Featured. Bookmark the permalink.