You could swim through the air at last night’s HPM it was so humid! Ugh. We opened up the range early so people could get a little training in if they were so inclined. Both Erik Hoskins and myself gave mid-barrel tuners a try before the match. I was using a “Scott Group Tightener” and Erik was using a “Limb Saver”. Our test groups (for both of us) were a little inconclusive but you could CLEARLY see a change in group size as you moved the tuner along the barrel in 1/2 inch increments, we’re just not sure that the tuner made the groups smaller. Regardless, the tuner did provide us with enough positive feedback to warrant a little more testing. I will say this though, in my case, the tuner did not make a crap lot of ammo shoot better. My “good” lot shot good, and my “bad” lot shot bad.

Anyways, on to the match. Joe Graf, setting yet another personal best for the second week in a row, took third place with a 399-31x. Dan Holmes took second with a 399-33x, and Erik Hoskins won the match with a very nice 400-37x. Complete results are here. Also of note, Fred Beihold shot shot a personal best last night as well.

Erik Hoskins bagged a bambi on the way home from the match. Erik and truck are fine but bambi’s feelings seemed “hurt.” 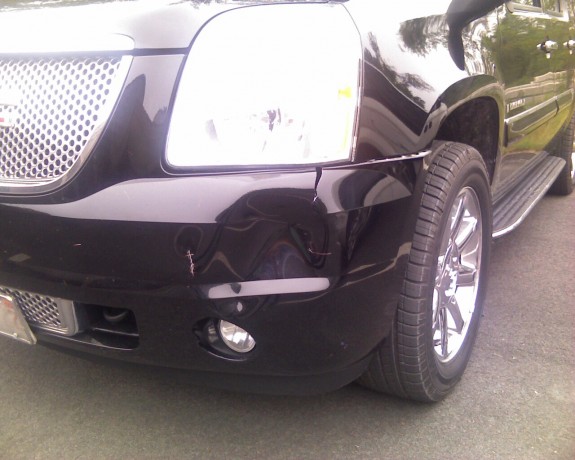 Dan Holmes started shooting competitive smallbore in 1986. During his Junior career, he earned two national junior team titles as well as local and regional wins. After a 10 year year hiatus to attend college and start a family, Dan returned to the sport and has added local, sectional and regional wins to his shooting resume. Dan is a Distinguished Rifleman, National Record Holder, U.S Dewar Team Member, Black Hawk Rifle Club Member, Digby Hand Schützenverein member, and is the founder of pronematch.com. He lives in Massachusetts with his wife and 2 children.
View all posts by Dan Holmes →
This entry was posted in Hopkinton Prone Matches. Bookmark the permalink.